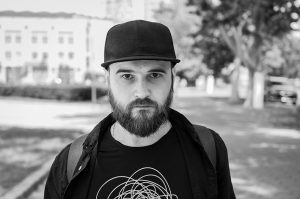 He attended Lyubashiv High School, where he joined a theater group. He also performed as a reciter at local competitions. In 2010 Khajetsky completed his studies at the Odessa Polytechnic University. Beginning in 2013, he worked at the Odessa College of Economics, Law, Hotel and Restaurant Business as deputy director.

Khajetsky wrote his first poems while still at school, initially in Russian. In 2012, however, he switched to using only the Ukrainian language. He draws the themes for his poems from observations and his own perceptions. As far as the outside world is concerned, it is mainly his hometown of Odessa, but also the landscapes of the Ukraine that serve as a source of inspiration. Khajetsky has taken part in a number of artistic projects and festivals, including the first Odesa International Literature Festival in 2015, the »Bessarabischen Dialogues« in 2015, initiated by the Ukrainian Ministry of Culture and the writer Andriy Kurkov; he also joined the independent association »Just Poetry« and participated in street readings »Direct Speech«. Since May 2018 he has been a member of the Council for Culture and Arts at the State Administration of Odessa.

In 2016 Khajetsky’s first volume of poetry was published »Три крапки« (tr: suspension points), a collection of texts written between 2012 and 2016. His debut was received with enthusiastic approval from the critics, who celebrated the author as the literary discovery of the year. The poet Dmitry Lazutkin also commented: »Here you see a character, an own position on life and openness. And a whole sea of love and the smell of steppe grass. A good combination!«

Khajetsky is currently preparing a second volume of poetry in which he places the human being at the center of his reflections.