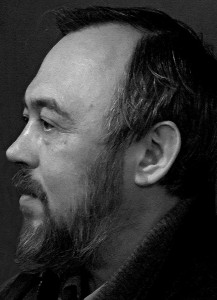 Aleksandr Kabanov was born in 1968 in Kherson. He studied journalism at the University of Kiev until 1992. He then worked for various newspapers, was president of the Vybor news and press agency in Moscow, and in 1999 became assistant general manager of the publishing house, TV-Park.

His poetry has been published in ten volumes, numerous anthologies and in literary journals such as »Novy Mir«, »Znamja«, »Volga«, »Druzhba Narodov«, »Kreschtschatik«, »Raduga« and on internet portals that include »Setevaja slovesnost’«, »Tolos« and »Poesia.ru«. His first volume of poems, »Vremennaja propiska« (tr. Intermittent residence permit) was self-published in 1989; »Vremja letajuschtschich ryb« (tr. Time of the flying fish) appeared in 1994, and, after an eight-year pause, »Lastočka« (2002; tr. Swallow), »Ajlovjuga« (2003; tr. Iloveyouga) and »Krysolov« (2003; tr. Ratcatcher) followed. In each of his collections Kabanov, like a demiurge, creates a small universe depicting the history of humanity – from its origins to its present. Sometimes Kabanov will employ a swift stroke to outline entire epochs and continents. While traversing his poems, which are rich in metaphor and allusion, the reader feels to be in constant contact with the whole world. Formative influences on the development of his poetic aesthetic included the Russian poets Ossip Mandelstam, Alexander Blok, Nikolay Gumilyov, Boris Pasternak and Joseph Brodsky, among others. His most recent publication, »Na jazyke vraga« (2017; tr. In the language of the enemy), which includes poems written from 2014 to 2017, relates to current events in Ukraine. As a Russian poet native to Ukraine, Kabanov finds himself in a particularly painful dynamic. In an interview he bemoaned the current tendency that in Ukraine only that which is written in Ukrainian is considered to be Ukrainian. »I don’t like the word ›Russian-speaking‹. It sounds awful. I am not Russian-speaking; I write in a language that developed here in Ukraine.«

Aleksandr Kabanov’s literary work has earned him numerous awards, such as the Prince Yuri Dolgorukiy International Literature Prize (2005), the »Novy Mir« Literary Magazine Award (2005), the International Voloshin Prize (2009) and the Anthologia Prize (2010). His poetry has been translated into several languages, including Ukrainian, German, English, Dutch, Italian, Georgian, Kazakh and Serbian. Since 2005 he has worked as editor-and-chief of »Sho«, a journal of contemporary culture. He also co-founded the Ukrainian slam »Zex« and is the coordinator of the Kyivsky Lavry international poetry festival. Kabanov lives in Kiev.