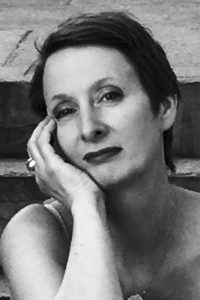 Emmanuelle Houdart was born in 1967 in the canton of Valais in Switzerland. She studied at the École des Beaux Arts in Sion and the École Supérieure d’Art Visuel in Geneva. She has worked as a painter and graphic designer since 1996 and has published approximately thirty books, primarily for children, as well as illustrations for texts by other authors. She illustrates various print publications, including »Libération«, »Le Monde«, »Sciences et Vie Junior« and »Ça m’intéresse« and leads workshops in schools. In 2007, she created the artwork for the Festival des Arts du Cirque Solstice in Antony and Châtenay-Malabry.

As an author and illustrator, she has developed her own artistic universe in which the inanimate becomes animate and animals and humans become hybrids. In her wondrous, sometimes monstrous, always rich narrative images, she gives her characters symbolic attributes that portray their identity as an emotional state. »I, like everyone else, have experienced many wonderful and terrible things. And that’s what I draw, the wonderful and the terrible.« Her preferred technique is drawing by hand with felt pens on cardboard, highlighting certain areas with color. »Monstres malades« (2004; tr: Sick Monsters), a book for children ages five to seven, has been translated  into German. Using bright colors, Houdart depicts a gamut of scary monsters with very human maladies: The devil has diarrhea, the werewolf a nosebleed, and the witch a fever. These creepy creatures join the likes of vampires, devils, and skeletons — each of which are given a two-page spread — and become less threatening when diarrhea chains them to the toilet, they have lice,  suffer from migraines, or are covered in chicken pox. They’re cured with butterfly kisses, warm drinks, and plush toys.

The book earned Houdart the 2005 Bologna Ragazzi Award. She has been awarded numerous further prizes for her artistic work, including the France Grand Prix jeunesse de la Société des gens de lettres for »Les voyages merveilleux de Lilou la fée« (2006; tr: The Fantastic Journeys of Lilou the Fairy), the Pépite du livre for »La boîte à images« (2014; tr: The Picture Box) and the France Grand prix de l’illustration for »Ma mère« (tr: My Mother) with a text by Stéphane Servant (2015). Between 2014 and 2016, she designed three sets of stamps for the French postal service. She also worked as a costume and clothing designer for several years, developing the designs for the textiles and costumes that were used for the »Barnhominum« exhibition at the Salon du livre et de la presse jeunesse in Montreuil. Her illustrations have also been displayed at art exhibitions in Montpellier, Bobigny, and Geneva, among other cities. In 2019,  her illustrations were on show at the book fair in Bologna as part of »Ein ABC der Schweiz« (tr. A Swiss ABC). She lives in Paris.