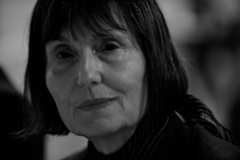 Ilma Rakusa was born in 1946 in Rimavská Sobota, Slovakia. After spending her early childhood in Budapest, Ljubljana and Trieste, her family emigrated to Switzerland in 1951. Rakusa studied Slavistics and Romance studies in Zurich, Paris and St. Petersburg. In 1971 she wrote her dissertation on the theme of loneliness in Russian literature, and subsequently worked as an assistant at the Institute of Slavic Studies of the University of Zurich. Since 1977 she has worked in Zurich as a lecturer as well as a freelance translator, journalist and writer. Not only does she translate into German from Russian, Serbo-Croatian, Hungarian and French, but she does so in a wide varieties of literary genres, as evidenced by her translations of the volume of stories titled »Der goldene Kaftan und andere Märchen« (1981; tr: The golden caftan and other stories) by the Russian writer Aleksey Remizov, stories by the Serbo-Croatian writer Danilo Kiš, theater plays by the Hungarian playwright Péter Nádas and the novel »The Lover« (1985) by the French author Marguerite Duras. In 2008 Rakusa published, together with Ursula Keller, a collection of 33 essays titled »Europa schreibt. Was ist das Europäische an den Literaturen Europas?« (Eng. »Writing Europe: What is European about the literatures of Europe?«). As a journalist for renowned publications like the »Neue Zürcher Zeitung« and »Die Zeit«, she advocates for Eastern European literature.

After her 1977 literary debut with the volume of poems titled »Wie Winter« (tr: Like winter), Rakusa published numerous additional collections of poetry and stories as well as lectures on poetics. In 2003 she forayed into Russian literature with her book »Von Ketzern und Klassikern« (tr: On heretics and classicists), a series of author profiles including Dostoevsky, Mikhail Prishvin and Daniil Charms. Her memories of a childhood and youth spent in a region forced to forge a new identity after World War II found expression in her 2009 book »Mehr Meer« (tr: More sea), described by a review in »Die Zeit« as akin to »poetic autobiography«. According to the »Neue Zürcher Zeitung«, the stories in her most recently published anthology »Einsamkeit mit rollendem ›r‹« (2014; tr: Loneliness with a rolling »r«) are colored by a pervasive undertone of melancholy, eliciting alternating moments of fleeting happiness and a feeling of rootlessness, yet also mediate between cultures.

Awards Rakusa has received for her work include the Petrarca-Übersetzerpreis (1991), the Leipzig Book Award for European Understanding (1995), the Swiss Book Prize (2009) and, most recently, the Prix Lipp (2013). The author is a member of the German Academy for Language and Literature. She lives in Zurich.

[About heretics and classics. Forays into Russian literature]