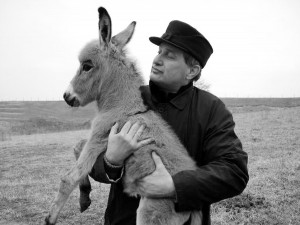 Mircea Dinescu was born in 1950 in Slobozia, Romania, and studied at the faculty of journalism of the Academia Ştefan Gheorghiu. Already considered a highly gifted poet at a young age, several volumes of his poetry won awards from the Romanian Writer’s Association and the 1978 Eminescu Prize from the Romanian Academy. Over the years, Dinescu grew increasingly critical of the Ceaușescu regime, and, from 1985, he was prohibited from publishing his work. His volume »Moartea citeşte ziarul« (tr. Death is reading the newspaper) was published in Amsterdam in 1988, and in 1989 he won the Netherland’s Poetry International Award. In spring 1989, shortly before the political change that was to sweep through Eastern Europe, the French newspaper »Libération« printed an interview with Dinescu, whereupon he was fired as the editor of the literary magazine »România literară« and placed under house arrest. Several writers and scientists took up his cause with the president of the Romanian Writer’s Association, but did not, however, protest against the oppression of the regime. This led Dinescu to write a declaration on November 11, 1989, in which he accused the Romanian intelligentsia of servility to Ceauşescu and to describe journalists as »apostles of the cult of personality«, among other reproaches. In December 1989 he assumed a prominent role in the Romanian revolution, and was first to declare the end of the dictatorship. From 1990 to 1996 he served as the head of the Romanian Writer’s Association and founded the satirical magazine »Academia Caţavencu«, which he left in 1998, and later launched two satirical publications of his own. In 1991 he was made an honorary member of the University of Augsburg.

His collections of poetry that have been translated into German, »Exil im Pfefferkorn« (1989; tr. Exile in a peppercorn), »Ein Maulkorb fürs Gras« (1990; tr. A muzzle for the grass) and »Ich bin der Besitzer der Brücken …« (1993; tr. I own the bridges …) present a representative cross-section of his oeuvre, starting in the 1970s right up to the time of his house arrest, when his life was at risk. His verses reveal a writer caught between the conflicting poles of individualism and the custodial restrictions of a morbid society. Without being overtly political, his verse exposes the brutality of the regime. »Back then I felt protected by an armor made of paper, paper on which my words had been printed in another language. This is how I cast off my fear of death. I owe my house arrest to words – I owe the feeling of a new, different kind of freedom to words.«

Translations of Mircea Dinescu’s work have also been published in Great Britain, France, Sweden, Hungary, Serbia, Bulgaria, Russia. He continues to be a public figure, with regular contributions in the press and appearances on television, where he also hosts his own show »Politica si Delicateturi« (tr. Politics and Delicacies). Between 2000 and 2016, he had two mandates as member of CNSAS, the National Council for the Study of the Securitate Archives. Since 1997 he set about restoring an abandoned agricultural port on the Danube and converting it into a »cultural port«, where he invites artists to participate in projects organized under the umbrella of his Poetry Foundation. The cultural projects are supported by a farm, a vineyard which produces his own brand of wines, a restaurant and accommodation facilities for tourists, all with the aim of converting »poverty into ecology«, and »gastronomy into poetry«.