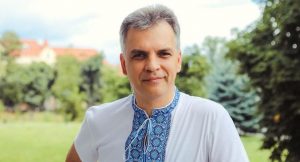 Oleksandr Havrosh was born in 1971 in Uzhhorod. He studied journalism at the University of Lviv. From 2006 to 2007, he worked as a dramaturge at the Transcarpathian Regional Ukrainian Music and Drama Theater. From 2009 to 2010, he developed a series of Ukrainian children’s books with classic texts for the publisher Grani-T. Since 2000, Havrosh has also been writing literary texts. After publishing several collections of poetry, he tried his hand at prose. Havrosh is the author of two novels, eight children’s books, three volumes of poetry, 13 journalistic books, and a series of plays. Several of his works have been translated into German, Slovakian, Serbian, and Polish. In 2009, Havrosh published his long story for children »Nejmowirni prigodi Iwana Sili« (tr. The Incredible Adventures of Strong Ivan), an adventure story about a mountain fortress in Transcarpathia. The book was filmed in 2013, and the film was named best Ukrainian children’s film. In 2014, Havrosh published a documentary book »U poschukach Iwana Sili« (tr. Searching for Strong Ivan) about the prototype for his protagonist, Ivan Firtsak (1899-1970), a Ukrainian Soviet circus artist, athlete, boxer, and freestyle fighter. Based on his book, in 2016, Maxim Melnik made a documentary film by the same name. Transcarpathia plays a special role in Havrosh’s literary work: »Transcarpathia is an interesting region for a creative person. There are many things here, I know it inside and out, I understand it, feel it. The Havroshes have been here since my great-grandfather’s generation. That’s my measuring stick. I do not like big cities, even though I studied in Lviv, lived in Odessa, and am often in Kiev.«

In 2009, Havrosh took a trip to the autonomous province of Vojvodina, where a number of Ukrainians who called themselves »Rusnaki« migrated 260 years ago. Based on documentary material and his personal impressions of the journey, he wrote the book »Blukajutschi narod« (2012; tr. Wandering People) about the 15,000 Ukrainians who still live there today and have preserved their dialect and culture as an ethnic group. The publication was awarded the »Koronazia slowa« prize in its year of publication.

Havrosh also writes screenplays for documentary and feature films. As a journalist, he works for different Transcarpathian and Ukrainian media as well as for Radio Liberty. He is a founding member and one of the chairs of the journalists’ clubs

»NeTaemna wetscherja« (tr. Not-Last Supper) and »Teatral Sakarpattja« (tr. Theater Friends of Transcarpathia) and is a member of the Ukrainian writers’ association. Havrosh lives in Uzhgorod.