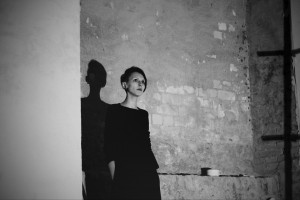 Olena Herasymyuk was born in 1991 in Kiev. Her ancestors came from the Carpathian Mountains, once the center of the struggle against Bolshevism. Immediately after World War II, her family, along with many others in the region, was deported from Ukraine to Kazakhstan, hence her father, the Ukrainian poet Vasyl Herasymyuk, was born in Karaganda. After Stalin’s death and the 20th party conference of the CPSU, her family were able return to their home country. Olena Herasymyuk studied literature in Kiev. While studying she also worked night shifts in the stockroom of a bookshop, where she could read all the books she could not afford with her grant money, all the while contributing greatly to her comprehensive erudition.

Like many poets of her generation, her work, which has been published in journals such as »Sonjaschnik«, »Ukrainian Literature Paper« and »Literary Ukraine«, is marked by a strong current of national self-consciousness. Her texts often probe the relationship between the self and the outside world: »All of life is an endless mountain of material for poetry.« In 2014 she published »Gluchota« (tr. Deafness), a collection of tightly composed texts whose dynamism derives from the author’s use of dominant verb forms. In 2016 at the art festival »Porto Franko Gogol Fest«, the cellar rooms of the Ivano-Frankivsk Theater were the site of a performance of her poem »Tyuremna pisnya« (tr. A prison song), which was recited by fighters from the ATO (Anti-Terrorist Operation) and former political prisoners.

Olena Herasymyuk has been a »Stanislavsky Fenomen« writer-in-residence, a project for young poets where two young authors live in Ivano-Frankivsk and discuss their texts with established poets as mentors. She has also won a series of awards that include first prize at the »In Memory of Leonid Kislev« competition, the Oles Honchar International Ukrainian-German Literature Prize and second prize in the poetry category at the »Fakel« literature competition. In 2013 she was awarded the Ukrainian President’s Prize for Poetry, which she refused in protest to the Yanukovych government. Several of her poems have been translated into English, Lithuanian, Georgian, Italian, German, Serbian, Polish, Belarusian and Russian. She works as a journalist for the Ukrainian radio station Svoboda. Together with Denis Polishchuk she initiated the project »Rozstriljanij Kalender« (tr. Execution calendar), which collects and publishes documents and information on the repression of Ukrainian intellectuals during the Soviet era. The author lives in Kiev.