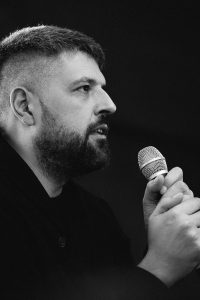 Serhiy Osoka was born in 1980 in Velyka Bahachka, near Poltava. He studied at the Pedagogical University in Poltava and later worked as a journalist for regional television and radio. Osoka’s texts have been printed in regional and national newspapers and magazines, including »Ridnyj Kraj« and »Kurier Kryvbasu«. He also wrote for the almanac of young authors of the Poltava region, »Bolotni Wogni« (2002). Osoka’s first poetry collection, »Sioma snizhynka sistchnia« (tr. Seventh Snowflake of January), was published in 2002.

The texts in his second volume of poetry, »Nebesna padalitsia« (2015; tr. Heaven’s Fruit), are about the eternal confrontation between love and death, about memories, and about attempts to halt the flow of sadness and revive a lost heart with words of poetry. The volume collects the poet’s most expressive poems, which reveal the extent of the depth of his mythological thought process and the metaphoric richness of his language.

Osoka’s short prose has appeared in the collection »Nitschni kupannja v serpni« (tr. Skinny-Dipping in August). His stories are generally about existential experiences like hunger, ageing, disease, weakness, hopelessness, and alienation, with powerful descriptions of the transience of love, pain, and the bitter taste of disappointment. In the texts of »Nitschni kupannja v serpni«, critics have recognized an important current trend in Ukrainian prose: the attention to childhood memories and family histories, as well as the private realm, through which larger contexts can be revealed.

Osoka was a winner at the Granoslov-2000 international literary competition for young authors. He also works as a literary translator and has translated works such as the novel »Stena« (2018; tr. The Wall) by Andrej Zaplienko. Osoka is a member of the Ukrainian writers’ association and lives in Poltava.