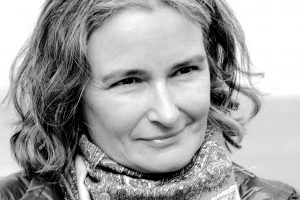 Vera Pavlova was born in 1963 in Moscow. In her youth, she studied music composition, graduating from Schnittke College of Music and the Gnessin Academy of Music with a focus on music history. She worked as a guide at the Shaliapin Museum, wrote scholarly essays on music, and participated in a church choir.

At around 20 years old, after the birth of her first daughter, she began to write poems. A first selection of her poems was published in the Russian magazine »Yunost« (tr. Youth). She gained greater recognition after the publication of 72 poems in the newspaper »Segodnia« (tr. Today). In her poems, Pavlova tends to focus on topics relating to womanhood. Her poems mirror today’s social and cultural problems from a female perspective – from the first signs of belonging to a gender in childhood to the disintegration of the family, followed by a late, mature love. Pavlova’s analytical candor accompanies – seemingly paradoxically – a decidedly traditional idea of family, marriage, and relations between the sexes. In the USA, Pavlova’s poems have appeared in magazines such as »Verse«, »Tin House«, »The New Yorker«, and »The New York Times«. One of her poems was selected by the »Poetry in Motion« program to be displayed on posters in New York City subway cars and Los Angeles buses, and was also issued as a bookmark by the Poetry Society of America. The poem provided the title for Pavlova’s first English-language poetry collection, »If There Is Something to Desire« (2009).

Pavlova has also written libretti for several operas including »Einstein and Margarita« (Music: Iraida Yusupova), »Prologue to Dido and Aeneas« (Music: Michael Nyman), and »A Christmas Opera« (Music: Anton Degtyarenko), as well as the oratorios »Shepherds & Angels« (Music: Iraida Yusupova) and »Three Saviors« (Music: Vladimir Genin). She recorded poems from Russia’s Silver Age as an audio book on seven CDs, and various Russian theaters have staged plays based her poems. The artist also experiments with different new forms of disseminating poetry, such as text message, postcards, video clips, and audio books. She has been the subject of several Russian and American documentary films. Her texts have been translated into over 22 languages. Vera Pavlova has been honored with numerous prizes, including the »Premiya Apollona Grigoreva« (2000), among others. She has participated in international poetry festivals in the UK, Germany, Italy, France, Belgium, Azerbaijan, Uzbekistan, the Netherlands, Ukraine, Greece, and Switzerland. She is the leader of the jury for the international translation contest for Turkish poetry »Ak Torna«. She lives in Toronto.