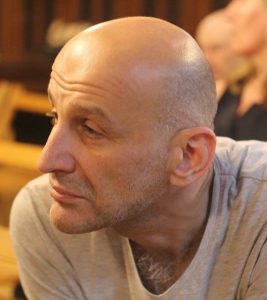 The writer, poet, translator, and art critic Shota Iatashvili was born in Tbilisi in 1966. To date he has published ten collections of poetry, a novel,  four collections of short prose and one book of critic, as well as two books of his translations: “American Poets” and essays by Susan Sontag. He has also translated the poems of contemporary Russian, Ukrainian, Belorusian and Polish poets into Georgian.

Iatashvili wrote his novel “ავადმყოფი ქალაქი“ (tr: Sick City), published in Russian translation in 1993, in early 1992, at the time of the Georgian civil War. His text, in which the author is generally looking for a metaphor for illness that can affect entire peoples, seems to anticipate the dramatic events that followed at the time. In “I live in a sick city”, the protagonist begins to tell his story. In his mind’s eye he sees tanks on the streets, hears machine gun salvos, experiences endless changes of government, and tells of canned mouse meat and jam made from cockroaches. Churches are transformed into porn temples, and finally the narrator sees an endless stream of corpses disappearing into the oven of the crematorium. The protagonist has some hope of being saved, but little hope of being able to change anything. When his friend is killed, he nevertheless picks up a weapon to eradicate evil. But then he kills not only enemies, but also his mother and his lover. In the end, the protagonist sees his hopelessly sick city and its inhabitants condemned to destruction.

Shota Iatashvili now is well known in the world as a poet. His poems have been translated into over 25 languages.

In 2016 the volume »Олівець у землі« (tr: Pencil in the Ground) was published with translations of his poems into Ukrainian. Thematically diverse, it invites the reader to engage in a conversation without specifically addressing an individual. »His poetry, however, is not didactic at all. He shares his insights and secrets as something that he keeps nevertheless. If you want – pause if you want – read on. Either way, his poems have a penchant for parables, transcending concrete human life and love stories and thus attaining universality.« (Serhij Zhadan)

In September of 2020 he is publishing his first novel “Beginner Nicolas”. The protagonist of the novel, poet Nikolas, suddenly realises that what he has done over more than half a century of his life is only writing poems and studying poetic aesthetics without deep thinking about how the world is arranged. In other words, his ideas of the laws governing the world are very superficial. This terrifying comprehension sharply changes Nikolas’s lifestyle. He starts accelerated studies of the fundamentals of all sciences at the same time – mathematics, physics, chemistry, biology, astronomy, palaeontology, and so forth.

Currently, Iatashvilli is editor-in-chief of the literary journal Akhali Saunje (newsaunje.ge) and consultant of Tbilisi International Festival of Literature (http://tbilisilitfest.ge). He has participated in many international festivals. For his literary work he has been awarded the Saba Prize for the best collection of poetry of the year (2007) and critic of the year (2011), the “Kievskye Lavry” International Festival Prize (2009), the Vilenica Crystal Award (2018), and polish literature award of Klemens Janicki for poetry book “Golden Ratio” (2018).

The author lives in Georgia.

The Wings of Death

The Flower of All Flowers and an Engineer

A Pencil in the Sky

The Bitterness of Poetic Experiences