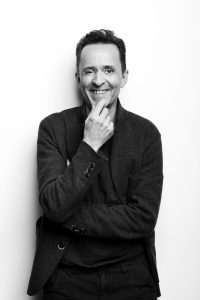 The Danish writer, illustrator, and comic and screenplay author Kim Fupz Aakeson was born in Vesterbro, Copenhagen, in 1958. He grew up in the municipality of Albertslund, graduated from Vallensbæk High School in 1977, and later attended Tvinds Rejsende Højskole, an alternative school project for teachers’ training through which he spent 16 months in Pakistan. He then returned to Copenhagen, where he pursued various creative activities. He temporarily worked for a radio station, began to draw and write, and discovered the comic genre for himself. After taking a course, he started working as a comic artist and published his first comic strips in Danish newspapers. However, after his first comics were published, he decided to explore other formats and published his first picture book, »Hvem vover at vække guderne?« (1984; tr: Who Dares to Awaken the Gods?). Gradually, he increasingly shifted towards writing. In his children’s books, he mainly deals with the subjects of death and illness. In »Så blev Farfar et spøgelse« (2005; tr: Then Grandfather Became a Ghost), little Erik’s late grandfather appears to him in the children’s room at night and walks through the wall. Erik thinks his grandfather is a ghost. However, the supposed ghost has something to do, but can’t remember what it was. Together with Erik, the ghost finds out that the grandfather had forgotten to say goodbye to his grandson. »Aakeson and Erickson succeed in using language that is simple in every way to tell a child that grandparents don’t disappear anywhere when they die.« (»colta.ru«) In addition to other children’s books and his work as a newspaper illustrator, Aakeson wrote his first novel »Min Laslo« (1993), which tells the moving love story of a young saxophonist named Laslo and a beautiful singer. Since this début, he has published seven novels and four short stories for adults. In 1996, Aakeson completed his training as a screenwriter at Den Danske Filmskole and subsequently wrote numerous manuscripts for plays, radio plays, short films, and feature films, such as »Den Eneste Ene« (1999; Eng. »The One and Only«), »Okay« (2002), »En familie« (2010; Eng. »A Family«), and »Kraftidioten« (2014; Eng. »In Order of Disappearance«), among others. He has received prizes for his screenplays at the Bodil Awards, the Copenhagen International Film Festival, the Hamburg Film Festival, and the Warsaw International Film Festival. Aakeson is also the author of numerous novels for adults. These texts, which follow the narrative tradition of Ernest Hemingway and Raymond Carver, move along the borderline between comedy and tragedy, and are mostly about people who pursue their happiness in vain and are plagued by feelings of inferiority as well as doubt and even envy. His writing style can be described as minimalist and cinematic, with the inner emotional movements of his protagonists pared down.

Aakeson has also received many awards for his literary work, including the Children’s Book Prize from the Danish Ministry of Culture in 1990 and the Lynx in 2000. In 2001 he was nominated for the German Children’s Literature Award.

He lives in Østerbro.