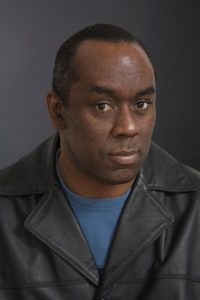 Alex Wheatle was born in 1963 to Jamaican parents in Brixton, England and spent most of his youth in a children’s home. At 16 he founded a reggae band. In the early eighties, he lived in a hostel run by social services and was sentenced to time in prison after attacking a policeman during the Brixton Riots. Through a cellmate, he found access to literature, especially authors such as John Steinbeck, Richard Wright, and C. L. R. James. Then he started writing himself, at first about everyday life in Brixton. He published several novels before turning to young adult literature.

His young adult book series set in a fictional neighborhood called Crongton, a social hotspot of violence and crime, was published between 2015 and 2017. In the teen novel »Liccle Bit« (2015), 14-year-old Lemar, called »Liccle Bit« because of his height, is involved in a gang war in his neighborhood. It takes time and a lot of courage for him to defend himself against the violent leader of the gang. Wheatle draws his characters with great nuance and does not fall into familiar clichés. Exciting passages alternate between comedy and tragedy. Wheatle uses the registers of youth language and slang, which allows the text to feel authentic, and he also shows the ambivalent emotional world of Liccle Bit, who is by no means a hero, but only a simple teenager struggling with the difficulties of his age: »I noticed how my heart popped back to the surface like an inflatable beach ball in the swimming pool.« The novel was nominated for the Carnegie Medal in 2016. »Crongton Knights« (2016) also takes place in the neglected suburb whose inhabitants are threatened by gangsters. Wheatle draws from the same cast of characters in the previous novel, this time from the perspective of a boy named McKay, who is constantly ridiculed for his large body. His mother has died, his father has gambling debts, and then he and his friends get caught between the gang fronts. The book, which won the 50th Guardian Childrenʼs Fiction Prize, has been praised for reflecting the situation in many cities around the world. Finally, »Straight Outta Crongton« (2017) deals with a first love under difficult circumstances and is told from the perspective of 15-year-old Mo.

Previously, Wheatle had written the one-man play »Uprising«, which was based on his own experiences at Tara Arts Studios in Wandsworth, London. In 2011 he went on tour through the UK with the performance. In »Home Girl« (2019), he portrays growing up in the welfare system from the perspective of a 14-year-old girl whose young life is shaped by deep pain and racism, despite which she experiences how strangers become family and a home finally emerges.

Wheatle, whose books have been translated into German, French, Italian, Welsh, and Japanese, was awarded the Order of the British Empire for Services to Literature in 2008, as well as, together with his German translator, the 2019 »Luchs des Monats« for »Straight Outta Crongton«, among other honors. In addition to his writing activities, he teaches creative writing at schools. He lives in London.