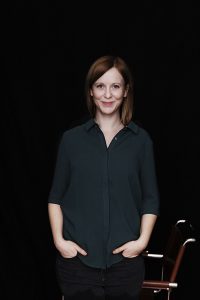 The Austrian writer and journalist Anna Weidenholzer was born in Linz in 1984. She studied comparative literature in Vienna and Wroclaw and wrote her final thesis on intercultural literature from Bosnia-Herzegovina. After her studies, she worked as a chronicle journalist for the Oberösterreichische Nachrichten.

In her first book »Der Platz des Hundes« (2010; tr: The Dog’s Place) she tells stories of people who live a life in loneliness. For example, there is an old man who prepares pancakes for his apparently no longer present dog and does not notice that the flour is full of food moths. Or a young woman who buys a bottle of whiskey before her boyfriend’s visit and drinks it alone when he doesn’t arrive. »There’s the apartment upstairs and the apartment downstairs, the people don’t really know anything about each other and so they live their lives parallel to each other. And that’s what I wanted to get across in the book: these small overlaps.« Weidenholzer’s début novel was nominated for the 2011 European Debut Novel Festival in Kiel.

Her novel »Der Winter tut den Fischen gut« (2012; tr: Winter is Good for Fish), which was longlisted for the German Book Prize, deals with unemployment and its consequences. It tells the story of a 47-year-old woman who loses her job as a boutique saleswoman and henceforth leads a life on the margins of society. In order to appear busy, the unemployed woman makes a phone call sitting on a park bench, and, with this excess of time, her life passes by in reverse chronology. Weidenholzer’s writing style is sober and slightly distanced. A sequence of main clauses dominates the text, underlining the hopelessness of the situation. Among the her sources, Weidenholzer mentions the sociological study »Die Arbeitslosen von Marienthal« (The Unemployed of Marienthal) from 1933, which clearly shows that long-term unemployment ultimately leads to a feeling of resignation.

In »Weshalb die Herren Seesterne tragen« (tr: Why the Gentlemen Are Wearing Starfish) a retired teacher sets out in search of happiness. The guide for his research is a modified questionnaire from 1979 on »Gross National Happiness« in Bhutan. His journey, however, increasingly turns into a flight, and the retired teacher becomes the object of others’ questions. The »ZEIT« wrote the following about the novel: »Anna Weidenholzer overlaps, and this is the trick of the novel, an old-school bookkeeping eccentricity with modern algorithmic procedures. There are serious themes in her new book. But it is as far removed from the seriousness of cultural criticism as it is from an original, very Austrian sense of humor.«

In her latest novel »Finde einem Schwan ein Boot« (2019; tr: Find a Boat for a Swan), Weidenholzer outlines an ethnography of the middle tier of society and illuminates the abysses of social normality.

In 2012 Anna Weidenholzer was the writer-in-residence of the town of Kitzbühel and also a grant recipient of the Literary Colloquium Berlin. In 2013 she was awarded the Reinhard Priessnitz Prize and in 2017 she received the Outstanding Artist Award for Literature.

The author lives in Vienna.