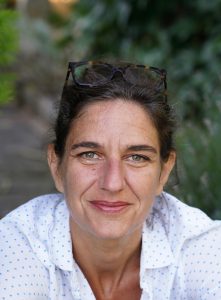 The artist and writer Gabriella Zalapì was born (1972) to an English-Italian-Swiss family in Milan. She spent time living in Geneva, Palermo, and New York. In 1998 she earned her diploma in painting at the Haute Ecole d’Art de Design in Geneva. Longer stays in Cuba and India were essential sources of inspiration for the development of her own artistic focus: What constitutes identity? Zalapì has presented her works in solo exhibitions in Geneva (2001, 2010), New York (2006), Sion (2009) and Paris (2012), as well as in a number of group exhibitions. She won the Prix Stravinsky in 1998 and was artist-in-residence at Château de Lavigny (2019). Zalapì uses her own family history as the basis for her work, taking photographs, archive material, and memoirs and composing them into a disquieting play of history and fiction. In addition to her drawings and paintings, Zalapì also used the exploration of the past in her first novel »Antonia« (2019). The eponymous heroine comes from a respected Austrian-English family and is married to a rich man from Palermo. Antonia is a bad mother and an even worse wife. She confides to her diary the daily discomfort she experiences in her loveless marriage. When her grandmother dies, Antonia receives boxes full of letters, notebooks, and photos – traces of her British-Italian and Jewish-Austrian family’s history. By studying these archives, she can reconstruct the mysteries of the family’s past – her Jewish grandfather who had to leave Vienna under National Socialism and an English branch of the family in Sicily. From her research she draws the strength to escape from her situation. The novel »Antonia« is about female emancipation in the 1960s. Zalapì intersperses the text with photographs from her family archive, which lends an additional intensity. »L’Humanité« reviewed the book as a »masterful first novel in which empathy does not drown out the message and emotion does not crush the subtleties.« The novel was awarded the Prix de l’Héroïne Madame Figaro in 2019 and the Prix Bliomedia in 2020.