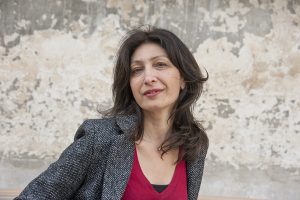 Kathy Zarnegin was born in Tehran in 1964. At the age of fifteen she moved to Switzerland. After studying philosophy in Basel, she complete a doctorate in comparative literature in Zurich. She also trained as a psychoanalyst and continues to offer counseling services today. Her poetry collection »SaitenSprünge« was published in 2006.

In 2017 she published her début novel »Chaya«, which tells the story of a young girl from Iran who decides to become a writer and dreams of Europe. When she finally arrives there from turbulent Tehran, she not only has to start a new life, but also has to invent a new identity. But Chaya is independent, freedom-loving, non-conformist, and not intimidated by anyone. She also finds support and a new home in poetry, with the help of which she processes her experiences and the serious changes in her life. The »ironically scintillating novel about the self-assertion of a rebellious young woman who, with wit, charm, and disrespect, challenges our ways of thinking about the Orient and Occident« (»Neue Zürcher Zeitung«) was nominated for the Franz Tumler Prize. Even though her own biography is undoubtedly reflected in this text, Zarnegin sees her protagonist as an independent figure who has taken over only a few key elements from the life of her author. Zarnegin’s intent was rather to emphasize the importance of language for one’s own identity after one has given up one’s home and mother tongue: »I am no longer there now, I have to create this home for myself somewhere else – really in the Hölderlin sense – with a different language repository and find my way around. This is a farewell and at the same time, of course, like every farewell, a new beginning.«

Most recently, her collection »Exerzitien des Wartens« (2020; tr: Retreat of Waiting) was published, a kaleidoscope of reflections, aperçus, aphorisms, and short essays about a state of being we all know too well: waiting!

Zarnegin is co-founder of the International Poetry Festival Basel and the Lacan Seminar Zurich. She is the author of numerous scientific publications, including on Gertrud Kolmar. In 2004 she was editor of »buchstäblich traurig« (tr: literally sad) and its theoretical and literary texts on the phenomenon of literary mourning. She also translates Persian poetry into German. In 2008 she was a finalist in the Christine Lavant Poetry Competition and in 2018 she was Writer in Residence in Krems, Austria.

The author lives in Basel.