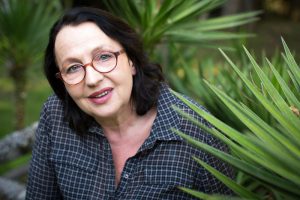 Katja Lange-Müller was born in East Berlin in 1951. After being expelled from school at the age of 16 for »anti-socialist behavior«, she learned typesetting, and later worked as a picture editor and as an assistant nurse in psychiatric wards. After studying literature at the »Johannes R. Becher« institute in Leipzig, in 1982 she lived in Mongolia for one year, where she worked at the »Teppichfabrik Wilhelm Pieck« in Ulaanbaatar. In 1984, she moved to West Berlin. Lange-Müller’s stories and novels are mostly about losers and outsiders in society, whose sometimes grotesque life situations reflect the shallowness of the present day better than any purely realistic narrative style. The works of Lange-Müller are characterized by linguistic wit, satire, and profundity. In 1986, she made her début with the story collection »Wehleid, wie im Leben« (tr: Lamenting, as in Life), which the critics only noticed after Lange-Müller read from her story »Kasper Mauser – Die Feigheit vorm Freund« (1988) in Klagenfurt that same year and won the Ingeborg Bachmann Prize. In this text, Lange-Müller tells the story of a person who moves from the GDR to West Berlin. »Verfrühte Tierliebe« (1995; tr: Premature Love of Animals) deals on the one hand with the complicated relationship between humans and animals, and on the other with the brutality of human relationships. A girl damages her school’s collection of dead insects and reptiles with scissors and glue, which gets her expelled from school. Later, she, now a young woman, is caught stealing by a department store detective, who then acts out his sadistic tendencies on her during interrogation. For her subsequent novel, »Die Letzten – Aufzeichnungen aus Udo Posbichs Druckerei« (2000; tr: The Last Ones), Lange-Müller drew primarily on her experience as a typesetter to show the illustrious staff of an East Berlin printing press in the 1970s, whereby she succeeds in »depicting a past profession and milieu with precision and engagement, and in keeping the readers balanced between laughter and goose bumps« (Ingo Schulze). After the collection of stories »Die Enten, die Frauen und die Wahrheit« (2003; tr: The Ducks, the Women, and the Truth), the novel »Böse Schafe« (tr: Angry Sheep) was published in 2007. Set in West Berlin in 1987, it tells the story of the love between a GDR fugitive and a drug addict with a criminal record. In her most recent novel  »Drehtür« (2016; tr: Revolving Door), Lange-Müller examines the human desire to help from the perspective of an aged nurse who is in agony as she reflects on her life in an airport bathroom.

In addition to her literary work, Lange-Müller is also the editor of various anthologies. She has received numerous prizes for her books, including the Alfred Döblin Prize in 1995, the Wilhelm Raabe Literature Prize in 2008, the Kleist Prize in 2013, and the Günter Grass Prize in 2017. She has been a member of the Berlin Academy of the Arts since 2002 and of the Academy for Language and Poetry in Darmstadt since 2008.

The author lives in Berlin and Switzerland.