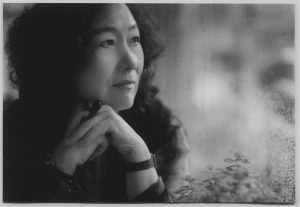 Moon Chung-hee was born in Posŏng in 1947 and grew up in Seoul. At a young age, she had already won several prizes for her poems, which she published for the first time while she was still a schoolgirl. With this, she was the first woman in Korea to publish her poetry independently. Additionally, she took lessons from a master of Korean poetry, Sŏ Chŏng-ju. During her studies at Dongguk University, she was named »Best Young Talent« by the monthly magazine »Wolgan munkak« (1969). Since then, she has published over 14 volumes of poems, lyrical plays, and essays, as well as over 60 volumes of other writings. Her works have been translated into nine languages.

In 2015, her collection of poems »Вслед за ветром« (tr: Following the Wind) was published in a bilingual Korean/Russian edition. The collection is dominated by philosophical, political, and poetological topics; a recurring motif is the sea, which is linked to Moon’s childhood memories are linked, which she conveys with an oriental visual language and metaphors.

Nearly all of Moon’s poems are grounded by a melancholic tone, portray emotional human experiences, and convey the confusion of self-awareness against the background of descriptions of nature. In places, however, aggression is mixed with sadness, and provocative images are created. The family and the different ages of its members are given ample space, from the old, worn-down mother to the newborn. Amazement alternates with resignation, and behind everything is the knowledge of the transience of the living. Many texts refer to the subject of the oppression of women and their sexuality in traditional, but also in Christian Korea, as well as the sadness of acknowledging the transience of female beauty. »Spend time in bed with a poppy in your hair instead of at your desk.« Yet not only women’s issues are in the spotlight; Moon also writes about male experiences within the family unit: »Men / who become the father of a daughter / say goodbye to the animal / which growls in them. / […] They understand that God was born in the same way as children / and blush with shame.«

Moon has received numerous national and international awards for her work, including the Hyundae Literary Award, the Korea Culture and Arts Grand Prize, the Samsung Award for Creative Women, and the 2004 Macedonian Poetry Prize. She has participated in many international literary symposiums at American universities, as well as in Italy and Sweden. In addition to writing her own texts, she also translates poetry into Korean.

Moon is the head of the Korean Poets Society and lives in Seoul, where she is a professor at Dongguk University.

Woman on the Terrace

I Must Be the Wind