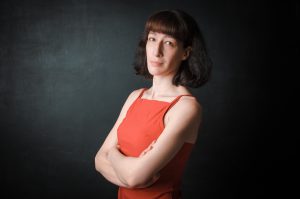 Taya Naydenko was born in Odesa in 1982. After school she started but did not finish various university studies in subjects related law, philology, and technology. She worked in a municipal housing administration, in the personnel department of a call center, in the administration of the Odesa morgue, as an analyst in an IT company, and finally as a journalist. As diverse as this selection these activities may seem, they all have one thing in common: »In fact, it was always the same work that I really enjoy – working with texts.«

Since 2015, Taya Naydenko has concentrated on writing journalistic texts and essays.

She started with a Facebook blog and, after the success of several of her publications on the Internet, became a columnist for »Artikul‘«, »Gostinaja«, and »Kaschtan«, and became a journalist for the weekly magazine »Odesskaja shizn‘« in 2018. Naydenko began writing poetry as a child. Since 2002, she has regularly held readings in her hometown. Her poetry has been published online and in print in Ukraine as well as abroad. In 2019 she published her first poetry collection, »Vsjo dano« (tr: All Given), which contains poems from the years from 2013 to 2018. In their stylistics and poetic energy, the texts have been associated with the poetry of the Silver Age, specifically with the school of Acmeism, of which Lev Gumilyov, Anna Akhmatova, and Osip Mandelstam are considered the main representatives. The texts are mainly about Odessa, but they do not reproduce the clichéd image of a »city of humor« or postcard motifs of sunny beaches on the Black Sea. The sea can nevertheless be felt between the lines. The poems are like a reflection of contemporary Odesa, a kind of modern epic in which a modern myth of the city creates itself. The literary scholar Yuri Volodarski wrote: »Her poems are rational, concrete, logical, full of irony and self-irony. With excellent, subtle humor. Sometimes demonstratively open. Sometimes journalistic, with a pronounced nonconformist position. Her poetry is sometimes emphatically feminine – in the sense of subject matter and perspective. At the same time it is by no means a feminine discourse. Naydenko’s poems are like Naydenko herself – brusque, harsh, stubborn.«