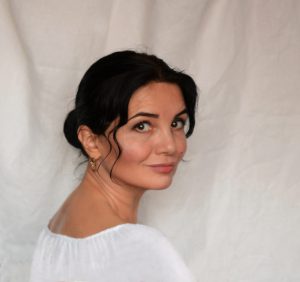 Maryna Pavlenko was born in 1973 to a family of teachers in Starychi, Lviv Oblast. Shortly thereafter, the family moved to Cherkasy. Thanks to her parents, both of whom were teachers of Ukrainian language and literature, she became interested in books at an early age and began writing as a child. She studied at the Pavlo Tychyna Uman State Pedagogical Institute (now: University), after which she taught primary school classes in Uman. Since 2000, Pavlenko has been teaching at the Institute for Ukrainian Literature and Ukrainian Studies at her alma mater in Uman. She holds a doctorate in education, serves as an associate professor, and is the author of numerous scientific publications and methodological recommendations. Pavlenko made her début as a poet with the poetry collection »Buskowi soschiti« (1997; tr: The Purple Notebook), which was followed by two further volumes. At the same time, she began to write children’s books. The first of these, »Domowitschok iz palitroju« (2001; tr: The Dwarf with a Palette), is about two sisters who paint the glass mirror of a house, thus freeing the house ghost from its imprisonment. In doing so, they not only gain a good friend who can advise them, but also experience colorful and fairytale-like adventures. In the books revolving around »Rusalonka iz 7B« (tr: The Mermaid from 7B), which tell the story of the life of seventh-grader Sofiyka (alias Rusalonka), Pavlenko combines inscrutable events of the present day with secrets from Ukraine’s difficult past. In this series, the author deals with current topics for Ukrainian youth today, ranging from growing up and the search for self to their relationship with their mother tongue and Ukraine, family and social relationships, moral, ethical, social and even environmental problems, as well as first love.

»For me, literature is life. I have been writing since I could think. I guess I also enjoyed drawing a lot. In my works, I try to combine many components in order to achieve maximum dynamics and comprehensiveness within the plot, a lightness and vividness of language, truthfulness, a vivid imagination, fresh images, etc.«

Maryna Pavlenko has also published prose for adults, including a volume of short prose  ntitled »Jak doschiti do sta« (2004; tr: How to Live to One Hundred), which was awarded the International Ukrainian-German Prize Olesya Gonchar, and the novel »Santa Lucia v kirsovich tschobotach« (2010; tr: Santa Lucia in Kirsa Boots), an artist’s story based on true events and centered around the Italian Leo Sorezina, whom fate brings to Ukraine in the 1950s.