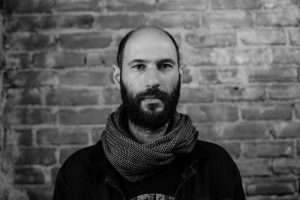 Marko Pogačar was born in Split in 1984. After finishing school in his hometown, he studied comparative literature and history at the University of Zagreb.

Pogačar has published five collections of poems to date. He made his début with »Pijavice nad Santa Cruzom« (2006; tr: Vortex over Santa Cruz), which was enthusiastically praised by the critics and received the Narvh Jezika Award for the best Poetry Collection of a Writer Under 35 as well as the Kvirin Award. One year later, he published his second anthology »Poslanice običnim ljudima« (2007; tr: Letters to Ordinary People). With his third book of poetry »Predmeti« (2009; tr: Objects) he became an important representative of the Croatian literary industry. Pogačar’s poems combine fragmentary images; his lyric I meanders between philosophy, politics, pop culture, everyday observations and reflections on his own language: »My language is Mecca / the fleshy fist, Macchia, / a plant that catches fire.« Restless and overwhelmed by the associations and rhythms of his own verses, the young poet presents himself as a man who is obsessed with and driven by language, and who always knows how to experiment with forms and contents. Pogačar’s poetry has been translated into more than thirty languages and published in many international anthologies and magazines. In 2016 an anthology of poems from four of his collections was published in Ukrainian for the first time, “Людина вечеряє в капцях свого батька” (tr: Man Dines in His Father’s Slippers). This edition is especially unique because the dual sounds of Pogačars poetry are preserved through the male and female translated voices.

Given his broad knowledge of Croatian and international literary history, Pogačar’s output is complex. In addition to his poetry, he has published a series of essays, reviews and interviews (»Atlas glasova« and »Jer mi smo mnogi«, both 2011). He has also published prose, including the short story collection »Bog neće pomoći« (2012; tr: God Will Not Help) as well as travel books. Pogačar served as editor, publisher, critic, and editor-in-chief of the literary magazine »Ka/Os« , »Quorum« and »Zarez«.

and was a drummer for the post-punk group »Death Disco«. He also translated English and American texts. Thus, Pogačar is not only an accomplished lyricist, but he is also an expert in the literature business from all perspectives. In 2014 he published an anthology with texts by young Croatian poets. He was a guest of the Literary Colloquium Berlin, the International Writers House Graz, and received a scholarship from the Brandenburg Gate Foundation. In 2020 he is a guest of the DAAD’s Artists-in-Berlin Program.