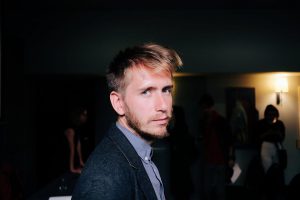 The poet Liubomyr Serniak was born in 1992 in Pustomyty in the Lviv region. He participated in various literary competitions and festivals such as Knishkowij Arsenal (Eng.: The Book Arsenal), Book Forum Lviv, Fajna Misto (Eng.: Fine City), Air Gogol Fest, “Y” Art Festival, Selena Khwilja (Eng.: Green Wave), and many others. He also moderates readings and literary presentations. He mainly combines text, music, and rhythms, while primarily working with the musician and designer Nasar Gajdutschik (KDNP) from Lviv. In 2016 he won the “Vytoky” poetry competition of the Ostroger Academy (National University of Ostroh Academy).

In 2018 his first book of poems »Gute Jungs kommen als Erste ins Ziel« (tr: Good Boys Finish First) was published. In free and dynamic verses, the texts trace the sometimes rapid, sometimes slow movement through life. At times, the images whirl breathlessly through the space, which in the next contemplative moment reveals a glimpse of the opposite person or, in the far distance, the movement of the clouds. Serniak has also presented these texts as a musical-poetic performance in more than 10 Ukrainian cities and at the country’ s most important literature festivals, such as the Book Forum Lviv.

The author lives in Lviv.