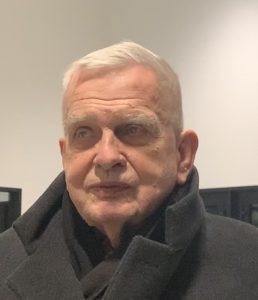 Tomas Venclova was born in 1937 in the Lithuanian harbor town of Klaipéda (formerly Memel), and studied Lithuanian language and literature in Vilnius. During longer stays in Moscow (1961–1965) and Leningrad (1969–1972) he met other writers, such as Anna Akhmatova and Joseph Brodsky, and became an activist in the civil rights movement. Between 1966 and 1971, he studied semiotics and Russian literature at the Estonian University of Tartu. After his return to Vilnius he worked as a lecturer in the history of literature and semiotics at Vilnius University. In 1976 he co-founded the Lithuanian Helsinki Group, which campaigned for the protection of human rights. In 1977, with the help of Joseph Brodsky and mediation of Czesław Miłosz, he managed to emigrate to the USA, where he was invited to be a visiting professor at the University of California in Berkeley. As a result, he was stripped of his Lithuanian citizenship and was granted political asylum in America. He taught poetry and modern Lithuanian, Russian and Polish literature at Yale from 1980 until 2012, where he earned his PhD in 1985 and became a tenured professor in 1993 (Professor Emeritus, 2012).

Because his poems and essays were censored in his home country, most of his oeuvre originated in exile. One of his first poems »Hidalgo« was circulated in samizdat form, partly in reaction to the suppression of the Hungarian uprising in 1956. He writes: »We will never understand, why / intended for us are places and tribunes, / bullets, hangman’s nooses and armored turrets.« Venclova is without doubt one of the most important Eastern European poets. Brodsky said about his poetry: »Venclova’s song begins, where the voice normally fails, breaks, and where all forces of the soul are exhausted.« In his very formal poetry, he focuses on rhythm and sound, as well as particular qualities of the Lithuanian language. His themes are contemporary history, exile, and, of course, linguistic expression. A part of Venclova’s work has also been translated into German, including the two anthologies »Vor der Tür das Ende der Welt« (2002; tr: Outside, the End of the World) and »Gespräche im Winter« (2007; tr: Conversations in Winter), and his urban portrait »Vilnius. Eine Stadt in Europa« (2006; tr: Vilnius: A City in Europe). Venclova, who was a guest of the DAAD Artists-in-Berlin program in 2012, was awarded the Petrarca Prize for European Literature in 2014.

In 2010, Venclova was a Samuel Fischer Visiting Professor for Literature at the Freie Universität Berlin. At present, he lives in Vilnius.

Life and Art of an Iconoclast