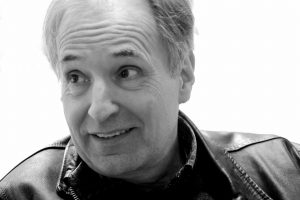 Alois Hotschnig was born in 1959 in Berg im Drautal in Carinthia, Austria. He originally studied medicine, but then switched to German and English literature at the University of Innsbruck. He received the sponsorship prize of the State of Carinthia for his first story, »Aus« (tr. Out), which was published in 1989. As in many of his later works, the setting at first seems idyllic. In an Austrian village, at the deathbed of his father, a farmer, Artur Kofler breaks his silence about the humiliations and brutality passed on for generations in the male-dominated village community. Alois Hotschnig’s tone is simple, precise, and ruthless. Settling the score with the parents’ generation also plays an important role in his play »Absolution«, which premiered in 1994: Ludwig is dead; as his parents wait to receive the body, Ludwig’s brother Georg accuses their father of transgressions and lifelong lies. Until the end, it’s unclear as to whether or not Ludwig has really died or whether he might still come walking in through the door. Alois Hotschnig’s writing bears traces of the existentialism found in works such as Samuel Beckett’s »Waiting for Godot«. In his story collection »Die Kinder beruhigte das nicht« (2006; Eng. »Maybe This Time«, 2011), a family waits for Uncle Walter, who is a fixed part of their life without ever having appeared in it. Hotschnig circles around the absence of people. His characters are caught in absurd situations, in relationships whose reason and point they don’t understand and that have something Kafkaesque in their hopelessness and anxiety.

Although he also writes novels, Alois Hotschnig is primarily an important short story writer: »The short form makes it more possible for me to try out new facets of my writing.« In 2008, he received the Erich Fried Prize, because – according to the jury – he maintains and develops the »unjustly neglected« short story genre »like no other current German-speaking writer«. In the opening story of »Im Sitzen läuft es sich besser davon« (2009; tr. It’s Easier to Escape While Sitting), he introduces a new, darkly humorous tone: Karl the dog tyrannizes an entire village until it is discovered that his bite has healing properties. As in his other works, Hotschnig shows joy in absurd dialogue and pulls the reader into his precise observations of seemingly ordinary things. The »Süddeutsche Zeitung« praised him as one of »the best authors of his generation«. In 1992, Hotschnig was awarded the prize of the State of Carinthia at the Ingeborg Bachmann competition in Klagenfurt and received the Anna Seghers Prize for »Leonardos Hände« (tr. Leonardo’s Hands). In 2002, he was awarded the Italo Svevo Prize for his oeuvre. In 2004/2005, Hotschnig was a guest of the International Artists Villa Concordia in Bamberg. He received the Tirol State Prize for Art in 2007. He lives as a freelance author in Innsbruck.