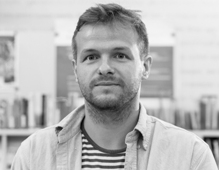 Artem Chapeyv was born in 1981 in the western Ukrainian city of Kolomyja. After graduating from high school in 1998, he began to study at the National Academy of State Security, but dropped out during the »Ukraine without Kuchma« anti-government protests, eventually graduating with a bachelor’s degree from the national university »Kiev-Mohyla Academy«. During his studies, he worked as a loader, courier, editor of a children’s magazine, translator for the TV channel »Inter«, and was also a reporter for the Ukrainian Foreign Ministry. A one-and-a-half year trip through Latin America inspired his first book »Awantjura« (2008; tr. An adventure), which, as promised by the subtitle, is an »erotico-political kaleidoscopic documentary« of an itinerant ladies’ man. Chapeye takes a critical view of the political and social situation in Mexico, witnessing the nation-wide strike of migrant workers under their slogan »No Person is Illegal«, which he particularly identifies with, as he has been hitchhiking and staying with strangers during this time. What strikes him most is the absurdity and inhumanity propagated by a globalized economy: a plantation worker is paid just a few cents for a whole sack of coffee, while in Europe we pay many times more for just a pound of coffee beans. His second book »Podorosh iz Mamajotoju v poschukach Ukraini« (2011; Eng. »Travels with Mamayota: In Search for Ukraine«, 2011) is a travelogue of sorts: here the author travels across his native country on a motorbike, visits friends, and encounters strangers, different languages and mentalities. Although his reporting is subjective, it dispels many clichés about Ukraine. In the anti-utopian novel »Tscherwona zona« (2014; tr. Red zone), Chapeye describes the existential struggle of a journalist, and conjures up a sinister vision of Kiev in the near future. The infrastructure has deteriorated further, residential estates have turned into slums, even people who own the newest gadgets have no access to clean drinking water: social ills that lead to an increasing divide between the poor and wealthy within a supposedly democratic society. During the military conflict in Donbass, Chapey was a war correspondent for »Insider«. With Russian-Ukrainian journalist Kateryna Sergatskowa he co-authored a collection of reportages, »Wojna na tri bukwy« (2015; tr. War in three letters), covering the war from both sides and the actions of the Anti-terror Operation (ATO; Donbass, Odessa), which was nominated for the International »Kurt Schork« Journalism Award. Apart from being a writer and journalist, Chapeye has also translated works by Mahatma Ghandi and Edward Said.

Three of his books were among the top five short-listed for BBC Ukraine’s Book of the Year. Chapeye is one of the founding members of »Save Old Kiev«. He lives in Kiev.