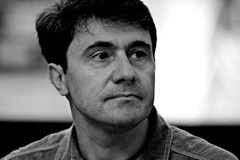 David (Dato) Turashvili is a Georgian fiction writer – author of novels, movie scripts and plays for theatre. After graduating from the secondary school, he studied literature, film and art history at the universities of Tbilisi, London and Madrid.

His first collection of short stories was published in 1991 – in the year of the Georgian independence from the soviet empire. Before the liberation, Dato Turashvili was one of the leaders of the student protest movement against the soviet regime in Georgia. For this moment, he has published 17 books, his bestselling novel »The Flight from the USSR« (2008) which is translated in 11 foreign languages and published yet in 10 countries. He has written plays and scenarios for such famous directors as Robert Sturua, Eldar Shengelaia and Gela Babluani. Furthermore, Dato is the author of scientific-research letters in literary criticism and historiography. He has translated both prosaic and poetic texts from Russian, Spanish and English languages. Dato Turashvili has been actively engaged in UN Women’s awareness raising campaigns against VAWG/DV in Georgia leading public discussions around these topics throughout the country and on television. Turashvili actively participated in confidence building projects, such as the Pen marathon 2015. He is further author of a drama play on VAWG issues.

His other interests include mountain climbing. He has participated in expeditions to the Caucasus, Andes and Himalayas. Dato Turashvili is a host to the most popular TV shows about books in Georgia. He is married to Maka Kekelidze and has three daughters – Anna-Mariam, Liza and Sofio.