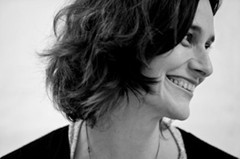 Katja Petrowskaja was born in 1970 in the Ukrainian capital of Kiev and studied literature and Slavic studies at the University of Tartu in Estonia. She received a scholarship to study at Stanford and Columbia Universities in 1994–95 and completed her doctoral thesis on the poetics of Vladislav Khodasevich’s prose at the University of Moscow in 1998. A year later she moved to Berlin, where she still lives, to work as a journalist for Russian media such as »Snob« magazine, also publishing articles in German-language newspapers such as the »taz« and »Neue Zürcher Zeitung«. Since 2011 she has written a regular column »Die west-östliche Diva« (tr. The West-East Diva) for the »Frankfurter Allgemeine Sonntagszeitung«, whose features pages also began presenting her »picture of the week« at irregular intervals in 2015.

In an 2013 essay written for the illustrated book »Die Auserwählten« (tr: The Chosen), she described her search for remnants of her Soviet childhood after having accompanied the photographer Anita Back on a trip to the Orlyonok children and youth holiday camp. A Grenzgänger (cross-border) scholarship from the Robert Bosch Stiftung in 2010 provided her with the opportunity to research her family history, an endeavour that took her to Kiev, Warsaw, Moscow, Vienna, and Washington, DC, among other places. The successes and dead ends of that search formed the background for her first novel, »Vielleicht Esther« (2014, tr. Perhaps Esther), and, according to Petrowskaja, also shaped the entire process of writing it. She describes the sparse results of her research as the paths to the book: »The fewer facts I knew, the more free, the more literary, perhaps also more reflective the text became.« From moments of uncertainty about, for instance, the real name of her father’s grandmother, as referenced by title »Perhaps Ester«, the author forms an image of a fragmented, traumatised century. »Incredulousness, scruple and a sense of humour inform every sentence of this haunting book.« (Robert Bosch Stiftung). Petrowskaja submitted an excerpt from her work on the National Socialists’ extermination of the Jews of Kiev in 1941 to the 2013 Tage der deutschsprachigen Literatur (Festival of German-Language Literature), which she had been invited to by Swiss literary critic Hildegard Elisabeth, and won the Ingeborg Bachmann Prize. The jury declared that her novel represented »a history being reclaimed by the later-born« and »a great gift to the German language«.

In 2015 Petrowskaja was recognized with the Premio Strega Europeo as well, and also carried out a research project at the Internationales Forschungszentrum Kulturwissenschaften in Vienna with the working title, »Alles, was der Fall ist« (tr. Everything, Which is the Case), about how tension develops between a photograph and the viewer, and between the content and context of (old) recorded images.