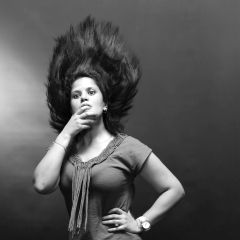 Meriam Bousselmi was born in 1983 in Tunis, the capital of Tunisia. She studied directing and dramaturgy in Tunis at the Centre Arabo-Africain de Formation et de Recherches Théâtrales from 2002 to 2007 and earned a master’s degree in judicial sciences in 2010.

Three years earlier she not only won the Theater Production Award given by the Culture Resource Foundation for her play »Zapping sous contrôle« (2007; tr: Zapping under control), she was also awarded the Literature Prize of the Arab Fund for Arts and Culture for her book titled »Brouillon de vie« (2007; tr: Rough draft of life). Critics found the work young and fresh, absurd and self-consciously crazy. While transcending genres and tackling taboo themes such as virginity, Bousselmi presents a critical portrait of our time, in which people bombarded from all sides by a flood of information are ironically in peril of losing their own verbal skills. In 2011 her play »Mémoire en retraite« (tr: Memory in retreat) was honored at the fourth Arabic Theater Festival with the Sheikh Sultan Bin Mohammed Al Qasimi Award for the best Arabic theater performance. The play centers on the conflict between a son and his father, who are locked in a dynamic of involuntary, mutual dependence. This relationship is a proxy for the struggle between the old, corrupt elites and the youths of Tunisia’s Jasmine Revolution, in which Bousselmi herself took part. In 2012, Bousselmi received a grant from the performing arts division of the Berlin Academy of the Arts and developed for Globalize Cologne – an international platform for theater and dance – the performance sequence »Odette«. 2013 saw the production of »Sünde Erfolg« (tr: Sin of success) in Cologne and »Truth Box«, a public confessional – installed at various locations in Berlin – that invited visitors to absolve others’ sins. In 2014 Bousselmi’s »Was der Diktator nicht gesagt hat« (tr: What the dictator did not say) premiered in Luxembourg. The play is a monodrama in which three years after the Tunisian Head of State Zine el-Abidine Ben Ali has fled, a nameless ex-dictator seeks to fill the silence enveloping him since being deposed by the revolution with imagined conversation. As she has done in earlier works, the author shows how people become victim to political manipulations and, in the worst case, are corrupted into supporting a dictatorship.

As part of her doctoral studies, Bousselmi has also been researching the staging of justice, as well as the relationship between justice and theater, and examines this theme in artistic projects, such as in the text »Fair or Unfair, that’s the question«, which is to be performed at the Carthage Theatre Days in November 2016. She will be a guest of the DAAD Artists-in-Berlin Program in 2016 and 2017.