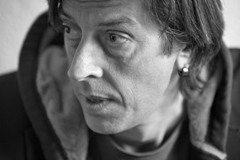 Pedro Lenz was born in 1965 in Langenthal, in the Swiss canton of Bern. After apprenticing as a mason, Lenz took evening classes, completing his Swiss high school equivalency in 1995, and subsequently studied Spanish literature at the University of Bern.

He has been a freelance writer since 2001; in 2002 he published a collection of 71 portraits, »Momente mit Menschen« (tr: Moments with People) – now out of print –, and a volume of poetry titled »Die Welt ist ein Taschentuch« (tr: The World is a Handkerchief). In 2005 Lenz published »Das Kleine Lexikon der Provinzliteratur« (tr: The Small Lexicon of Provincial Literature), a fictitious reference volume on unknown, frequently overlooked writers, such as a »master of botanical sonnets« and the author Res Gammenthaler, mentioned by cognoscenti in the same breath as Friedrich Dürrenmatt and Max Frisch. It is supplemented with non-fiction texts on themes such as »Educational Material«. According to a »Neue Zürcher Zeitung« critic, Lenz’ deliberately stilted vocabulary and skewed metaphors culminate in an affectionate parody of the Swiss literary establishment and the rhetoric of the Helvetian cultural funding commissions, but with a humor that is never scathing. The author’s first novel, »The Goalie bin ig« (2010; Eng. »Naw Much of a Talker«, 2013), was nominated for the Schweizer Buchpreis, was written in Bernese Swiss German and in 2012 was translated into High German as »Der Keeper bin ich« by the poet Raphael Urweider. In the story, a former junkie just released from prison seeks a new existence, but remains trapped by his past, no matter how much he tries to reinvent it. In 2014 a cinematic adaptation of the book, with the author participated in, was awarded the Schweizer Filmpreis. In »Liebesgschichte« (2012; tr: Love Stories), Lenz remains true to the people of his milieu, not only in his use of the vernacular, but also through ordinary settings and places where desire meets everyday life without any sort of Hollywood flair. His ability to create works of literary art with a critical yet affectionate gaze, and intuition for the rhythm of conversations at bus stops and other public places where people meet, can also be appreciated in his work for radio. From 2007 to 2011, and since 2014, Lenz has been part of a team of authors for »Morgengeschichten« (tr: Morning Stories) on SRF 1; »Radio«, a collection of his texts, was published in 2014. His book »Der Gondoliere der Berge« (2015; tr: The Mountain Gondolier), a collection of stories regularly written for the »Neue Zürcher Zeitung«, compassionately portrays people (such as kiosk women and minibar pilots) whose work often goes unnoticed. He is a member of the theater project »Hohe Stirnen« (tr: High Foreheads) and the spoken-word troupe »Bern ist überall« (tr: Bern is Everywhere).

Pedro Lenz currently lives in Olten, in the Swiss canton of Solothurn.