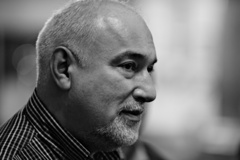 Varujan Vosganian was born in Craiova, Romania in 1958. He studied Commerce at the Academy of Economic Studies and Mathematics at the University of Bucharest, earning his doctorate in Economics from the latter in 1998. As a neoliberal politician, he represented the Union of Armenians in Romania in the Chamber of Deputies from 1990 to 1996 and has been a member of the Romanian Senate since 1996. After holding the office of Economic Minister in 2007 and 2008, from 2012 to 2013 Vosganian was Minister of Commerce and Industry.

Along with nonfiction publications on economics, for example »Contradicțiile tranziției la o economie de piață« (1994; tr. Contradictions in the transition to the market economy) » and Reforma piețelor financiare din România« (1999; tr. Reform of the financial markets in Romania)« and on politics, like »Dreapta Românească. Tradiție și Modernitate« (2001; tr. The Romanian right. Tradition and modernity), Vosganian has also published many essays and literary texts, including »Șamanul Albastru« (1994; tr. The blue) »Ochiul cel alb al reginei« (2001, tr. The Queen’s vacant gaze) and » Iisus cu o mie de brațe« (2004; tr. Jesus with a Thousand Arms) and the volumes of short stories »Statuia Comandorului (1994; tr. The statue of the commander) and »Jocul celor o suta de Frunze si alte povestiri« (2013; tr. The game of a hundred leaves). Vosganian gained renown beyond the boundaries of Romania with his novel »Cartea șoaptelor« (2009; tr. Book of whispering), which was translated into Italian, Spanish, Swedish, German, and other languages. Vosganian’s forebears survived the Ottoman genocide of the Armenians, and this book is a kind of family chronicle describing how, in the course of several generations, the paths of numerous real and fictional characters crossed in the Romanian city Focsani. Reviews of the novel consistently emphasize the author’s ability to simultaneously touch and humorously amuse readers while revealing sometimes almost forgotten injustice, from the massacres of Trabzon to the Soviet-organized repatriation of thousands of Armenians. The »Frankfurter Allgemeine Zeitung« also praised the expressive poetic power of the interwoven stories, whose laconic narrative style keeps them from succumbing to the danger of sentimentality that is inherent in such themes, and called the novel a »book of the century« that would enter literary history.

Along with his political offices, Vosganian is not only a member of the Romanian Humorists’ Association, but has also been the Vice President of the »Uniunea Scriitorilor din România« (tr. Writers Association of Romania) since 2005.

Cartea poemelor mele nescrise [The Book of my Unwritten Poems]

The Book of Whispers