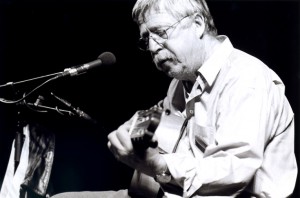 Wolf Biermann was born in Hamburg in 1936. His parents were in the communist resistance, and his father was killed in Auschwitz after years of imprisonment for his political activities. In 1953 Biermann left West Germany for the German Democratic Republic (GDR), and from 1957 to 1959 he worked as an assistant director at the Berliner Ensemble. In 1960 he began writing songs and poems, and met Hanns Eisler, who became his mentor. He completed studies in mathematics and philosophy at Humboldt University. After the erection of the Berlin Wall in 1961, he founded and led the backyard Berliner Arbeiter-Theater until it was banned in 1963. Prohibited from performing and publishing his work in 1965, his songs and poems were subsequently distributed illegally in the GDR as hand-written and tape cassette copies, and his poems and songs were smuggled across the border into the West, to be published as books and records. His poetry collections rank among the most-sold postwar German literature. Biermann became the most radical critic of the political dictatorship in the GDR, and his apartment the epicenter of intellectual exchange between East and West. In November 1976, as he was returning from a concert for the metalworkers’ union in Cologne, Biermann was refused reentry into the GDR and stripped of his citizenship, in breach of all legal norms. This totalitarian, arbitrary act against the poet triggered an expectedly large protest movement in the East and West, and for many marked the beginning of the end of the ruling regime.

Wolf Biermann returned to Hamburg, but also lived in Paris, traveling back and forth. In the West he went on worldwide concert tours with new songs and poems. In 1983, he turned away from his long-held belief in communism. In November 1989, East German civil rights activists fought successfully to have him perform for the first time in Leipzig. In 1990, he was among the occupiers of the East Berlin secret police headquarters who prevented the further destruction of Stasi files. He lectured on aesthetics at Heine University in Düsseldorf. His translation of the poem »Großer Gesang des Jizchak Katzenelson vom ausgerotteten jüdischen Volk« (tr. Song of the murdered Jewish people, translated from Yiddish) into German took two years. He published an entire series of poetic productions, translations of poetry and own poetry collections, including »Heimat. Neue Gedichte« (2006; tr. Homeland, new poems) and »Fliegen mit fremden Federn« (2011; tr. Flying with new feathers).

In 2007 Wolf Biermann was named an honorary citizen of Berlin. He has released many CDs, and has worked and performed with the Göteborg Chamber Choir, director Gunnar Eriksson, and jazz pianist Stefan Forssén. Since 2012 he has given concerts with his wife Pamela Biermann and the free jazz musicians of Zentralquartett. His autobiography appeared in fall 2016.