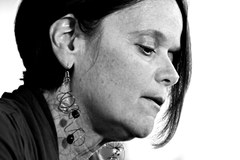 Zsófia Bán was born in 1957 in Rio de Janeiro, Brazil, and returned with her parents to Hungary, their homeland, in 1969. After studying English and Romance Languages from 1976 to 1981 in Budapest, she studied in Lisbon, Minneapolis, and New Brunswick, curated exhibitions, worked as a doctoral fellow at the Hungarian Academy of Sciences in Budapest and as researcher at the John F. Kennedy Institute in Berlin. She currently teaches American Studies as an Associate Professor at Eötvös Loránd University, one of Hungary’s oldest universities. In addition to American literature of the 19th, 20th, and 21st centuries, other research interests include, visual culture, holocaust studies and gender studies. Bán became known for her essays on writers like Winfried Georg Sebald, the American essayist Susan Sontag and Péter Nádas, among others.

Zsófia Bán had her literary debut in 2007 with »Esti iskola – Olvasókönyv felnőtteknek« (tr: Night school – A Reader for Adults), a collection of short pieces whose unbroken sense of humor unites their varied perspectives and references to a wide range of poetic traditions. Structured like a textbook for a night school, each text has been assigned to a school subject like geography or chemistry and concluded with an ironic task at the end of each chapter, a reductio ad absurdum of literature’s didactic function – for example, the instruction to remain as objective as possible while writing an essay on »My brother, the sad Kapo«. Bán’s ulterior objective is to expose the gaps in history and how they can be rewritten from the perspective of the oppressed. The author thereby not only forays into Hungarian language and culture, but also avails herself of other languages and cultures, including those of the country of her birth, Brazil. In 2012, she published a volume of short stories »Amikor még csak az állatok éltek« (tr: When There Were Only Animals), which in May 2014 made it into the bestseller list of the German broadcaster SWR. In these fifteen stories, Bán examines the consequences of a traumatic uprooting suffered by Anna, who lost sight of her mother in a crowd on a beach in Rio de Janeiro when she was little, and who, decades later, in a testing station in Antarctica, is still unconsciously searching for answers to her past while photographing a whiteout, a natural phenomenon where all visibility and contrast are reduced to a vast white expanse.

Bán has received many prizes, including the Balassa Péter Prize (2007), the József Attila Prize (2008), the Palládium Prize (2009), and the Tibor Déry Prize (2012). In 2014, she was shortlisted for the International Literature Prize awarded by Berlin’s Haus der Kulturen der Welt. She lives in Budapest.