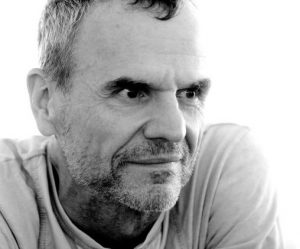 The Swiss writer Christian Uetz was born in 1963 in Egnach. After training to be a teacher in Kreuzlingen, he studied philosophy, comparative literature, and ancient Greek at the Universität Zürich. He first became known for his poetry and made a name for himself as a performer of experimental poetry. He often performed at literary events and festivals for poetry and spoken word, including events in New York, Berlin, and Medellín, Colombia. He published his poems in a series of collections and recorded them as CDs with jazz and improvisation musicians and composers. The overflowing energy of his performances matches the linguistic eloquence of his poetic texts. His verses shine with existentialism, passion, and sentimentality, his language densifies into an imploring, almost excited intensity. »The syllables are onomatopoetically closed, their seams are filled with letters until they threaten to burst or the words find a new meaning.« (»Berliner Zeitung«).

In his first novel »Nur Du, und nur Ich« (2011, tr: Just You, and Just Me) Uetz tells the story of two lovers who live in different cities and, due to the distance, attempt to keep their relationship afloat by traveling together. Their relationship hurtles through all the ups and downs of demands, desire, commitment and destruction, and Uetz captures this strong obsession, this radical lust that threatens with the loss of self, with a combination of everyday language, pathos, drastic neologisms, and a maelstrom of thoughts and imagery. In 2011, he also released »Federer für alle« (tr: Federer for All), an equally powerfully elegant homage to the tennis player Roger Federer. These books were followed by »Sunderwarumbe – Ein Schweizer Requiem« (2012) and the novel »Es passierte« (2015, tr: It Happened) about a fifty-year-old theologian who despite his fear of God searches for answers via sex and loses himself in many love affairs. When he then believes himself to be HIV-positive, his philosophical contemplations move into a space between Eros and Thanatos, from which he ultimately attempts to flee in a dramatic decision. Uetz’ newest work »Engel der Illusion« (2018, tr: Angel of Illusion) is a collection of poems paired with an essay. Again he proves himself a master of dynamic, vivid language, assonance, neologisms, and quotes, all while linking philosophy with the erotic: »From intensity to powerlessness: a blinding orgasm, a brightness in death, ecstasy from fatigue, an extravagant gift.«

For his literary work, Uetz has been awarded, among others, the 3sat Prize of the Ingeborg Bachmann competition in 1999, the Federation of German Industries Prize in 2005, and the Bodensee-Literaturpreis in 2010 for his complete oeuvre. He lives in Zurich as a freelance writer.