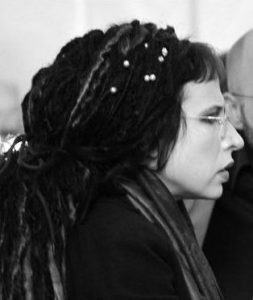 Sofi Oksanen was born in 1977 in Jyväskylä (Finland). She learned Estonian from her mother but she writes in Finnish. After focusing on Literature Studies at the universities of Jyväskylä and Helsinki, she moved to the Drama School in Helsinki and studied Dramaturgy. Her début novel »Stalinin lehmät« (2003, tr: Stalin’s Cows) describes the lives of the Estonian immigrants in Finland in the 1960s and 1970s, during an era in which official policies oppressed minorities and the Estonians were often attacked as Russians. This Bildungsroman links large political and historical events to the daily lives of Finns and Estonians. In this early work the (female) body already serves as a metaphor for the collective traumata in Finnish-Estonian relations. In her second novel »Baby Jane« (2005), set in Helsinki in the 1990s, Oksanen once again tackles the theme of violence against women, a theme she further pursued in the following stage play: »Puhdistus« (tr: Purge). The play was premièred in 2007 at the Finnish National Theatre in Helsinki and won great success with critics and audiences. The play is set in contemporary Estonia and tells of the fateful encounter between two women. Seeking refuge from pimps, the young Russian, Zara goes to stay on a farm owned by the elderly Finn, Aliide. Aliide must overcome her skepticism and misanthropy before she can take in the younger woman. Over time, the two women learn that are linked to one another through a fifty-year-old family tragedy. When Estonia was occupied by Soviet troops, Aliide’s fear of male brutality directed against women forced her to make monstrous choices. The play »Puhdistus« served as the foundation for the novel of the same name (2008, tr: »Purge«, 2009). In both the play and the novel, the example of Estonia is used to dissect European history and reveal the brutal and misanthropic nature of totalitarian power structures. In Oksanen’s work, the private sphere is closely connected to larger political events: in »Purge«, the abused body of a young woman becomes the symbol of occupied Estonia. Oksanen specifically shows what the loss of personal freedom can mean from a female perspective. The novel has been translated into over 20 languages and has won both the Runeberg and the Finlandia Áwards. In 2010 she was also awarded the Nordic Council Literature Prize. Sofi Oksanen lives in Helsinki.