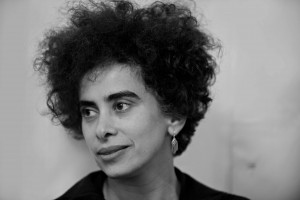 Adania Shibli was born in 1974 in Palestine. She earned her PhD in media and cultural studies at the University of East London. Her dissertation, titled »Visual Terror«, addresses the visual composition of the reporting by British and French television stations of the 9/11 attacks and of the »War on Terror.

In 2002 she published her novel »Masaas«, which has been translated into English (»Touch«, 2010) and French (»Reflets sur un mur blanc«, 2004). The plot centers on the youngest of nine sisters in a Palestinian family. The story follows her perceptions and experiences: she watches a funeral procession, she stands up to her sisters, she learns to read – and all these commonplace events unfold before a backdrop of family and national tragedies, like the Sabra and Shatila massacre. Shibli manages to connect the subtle images of her protagonist’s scattered perceptions through her fluid narrative style. Shibli won the A. M. Qattan Foundation‘s Young Writer’s Award Palestine for »Masaas« as well as for her novel »Kulluna ba’eed bethat al miqdar ’an al hub« (2004; Eng. »We Are All Equally Far From Love«, 2012). The protagonists of her second book are cut off from the outside world and self-absorbed: a woman falls in love with a man she corresponds with but has never seen; a young post office employee opens letters to inform her father of their contents and to steal anything of value; an unhappily married woman develops a passion for her doctor, whose rejection she refuses to accept; a supermarket employee agonizes over the thought of whether to approach a strange woman sitting alone on a bench. In a concatenation of stories Shibli examines the limits of unusual human interactions; the result is a powerful work on alienation and desire. In a 2014 collaboration with other writers and photographers she published »Keep Your Eye On the Wall: Palestinian Landscapes«, in which they explore the attitudes of Palestinians living in a divided and disfigured country. In 2004 the journal »Inamo« published two of Shibli’s short stories in German translation – »Schweigen« (tr. Silence) and »Zum ersten Mal fort« (tr. Gone for the first time) – whlie »Die Polizei und die Diebe« (tr. The police and the thieves) appeared in 2013 in an Edition Fototapeta anthology titled »Lost Words, Lost Worlds«. Her theater play »The Error« has been performed in both England and the United States.

She has taught at universities, including the University of Nottingham, and was a fellow at the Berlin Institute for Advanced Study. Shibli teaches visual culture and philosophy at Birzeit University, Palestine.