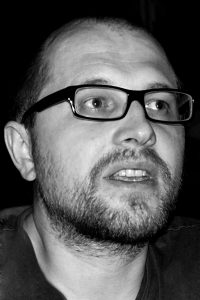 Andriy Bondar was born in 1974 in Kamianets-Podilskyi, Ukraine. He studied at the Pedagogical University in his hometown from 1991-1994 and completed his studies in literature in 2001 at the Mohyla Academy in Kyiv. Bondar was editor-in-chief of the magazine »Literatura Plus« from between 1998 and 2000, which was published by the Association of Ukrainian Writers. From 2001 – 2002, he worked as deputy editor for the magazine »Ewa«, and, until 2007, as editor of the literature section of the weekly newspaper »Dserkalo tyschnja« and the »Hazeta po-ukrajinskyj«, for which he also wrote columns starting in 2006. As a poet, he made his début in 1989 with »Vesinnja jeres’« (tr: A Spring Heresy), followed by »Istyna i med« (2001; tr: Truth and Honey) and »Prymityvni formy vlasnosti« (2004; tr: Primitive Forms of Ownership). Since 2013, he has participated in the Kyiv Euromaidan and comments on the situation in Ukraine on Facebook. He is considered to be one of the most popular bloggers in Ukraine. The anthology »Morkvjanyj lid« (2012; tr: Carrot Ice) is a compilation of Bondar’s columns for »Hazeta po-ukrajinskyj« from 2006 – 2012. »His poetry perpetually moves towards an invisible goal, a hidden sore point that inevitably reacts and makes itself felt […] You read his poems a second time, let them go through your head, try to solve the riddle, and finally realize that they grapple with something readers also struggle with: life.« (Mariana Maximyak)

The main theme of the poems in Bondar’s collection »Pisni pisni« (2014; tr: Songs of the Song) is the secrets of the Ukrainian collective soul and its relationship with Russia. Bondar surprises with a rich variety of forms including quatrains, haikus, aphorisms, free verse, and limericks. In 2016, he published a volume of short prose entitled »A tym, ščo v grobach« (tr: And For Those in the Graves). His texts are multi-faceted and allow for different perspectives and interpretations, offering a bizarre kaleidoscope of observations, images, and characters – from the Pope in Rome and TV show detective Rex, to intelligent mice. Ukrainian literary critics have compared them to a Rubik’s cube, which every reader can solve in his or her own way. Most recently, Bondar published »Cerebro« (2018), another collection of short prose texts that were written over a period of two years. At the beginning, they are still realistic and autobiographically inspired, then they move more and more into the realm of the magical and ambiguous.

He is a member of the Association of Ukrainian Writers  and has been awarded the Smoloskip Poetry Award. His poems have been translated into English, German, French, Polish, Swedish, Portuguese, Romanian, Croatian, Lithuanian, and Belarusian. Bondar lives in Kyiv.