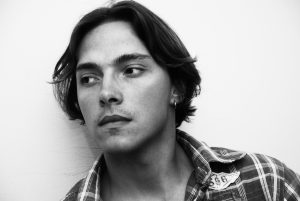 The Ukrainian poet, writer, and translator Andriy Lyubka was born in Riga in 1987 and grew up in Vynohradiv in Transcarpathia. After his schooling, he attended the military school of Mukachevo and studied Ukrainian philology at the Uzhhorod National University until 2009 and Balkan studies at the University of Warsaw until 2014. During this time, Lyubka also became politically active, supporting Viktor Yushchenko in 2004 and the candidate Aljaksandr Milinkevich in 2006 during the elections in Belarus, where he became persona non grata as a result. During this time, his first poems appeared in Ukrainian magazines, followed by the poetry collections »Visim misjaciv shysofreniyi« (2007; tr: Eight Months of Schizophrenia), »Terorism« (2008; tr: Terrorism), »Sorok baksiv plus chajovi« (tr: Forty Dollars Plus Tip) as well as the story anthologies »Killer« (2012) and »Saudade« (2017) and the essay collection »Spaty s zhinkamy« (2014; tr: Sleeping with Women). In his first novel, »Carbide«, which was one of the finalists in the BBC’s »Book of the Year« competition, he immerses himself in the world of smugglers in the Ukrainian Carpathians. In the same year, Lyubka’s crime novel »Twij poglad, Cio–Cio–San« (2018; tr: Your Glance, Cio-Cio-San) was published. It tells the story of a corrupt judge who kills a young woman on a pedestrian crossing while drunk and then wants to cover up the crime, before being incriminated by a witness who refuses to be silenced.

There is also a German translation of a volume of his poems, »Notaufname« (2012; tr: Emergency Room). The texts, which are difficult to decipher, depict people in both extreme situations with distorted perceptions as well as everyday situations, from fear of university exams to declarations of love in a night bar. Lyubka’s lyrical texts and essays have been translated into Hungarian, Czech, Portuguese, Russian, and Polish. He has received numerous scholarships, participated in many festivals, and is a laureate of »Debjut« (2007), »Kyjivs’ki Lavry« (2011), »Best Prose Book« from the Kovalev Foundation (2017) and the »Yuriy Shevelyov Prize for Modern Essays« (2017). From 2009 to 2011, he was curator of the »Kyjivs’ki Lavry« International Literature Festival, in 2014 he was one of the curators of the »Meridian«, the international poetry festival in Chernivtsi, and from 2006 to 2008 he headed the student parliament of Uzhhorod National University. His cultural-political columns appear, among other places, in the online magazine »Zbruc«, in the Kyiv daily newspaper »Den«, and in the Krakow magazine »New Eastern Europe«. He also works as a translator from Polish and has published, among others, volumes by the poet Bohdan Zadura. He also helped create video clips for the Ukrainian rock band »Rock–H«.

The author lives in Uzhhorod.