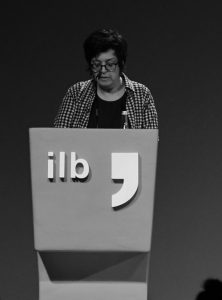 Angélica Freitas was born in Pelotas, Brazil in 1973. She studied journalism at the Universidade Federal do Rio Grande do Sul (UFRGS), lived in Porto Alegre for a few years, and then moved to São Paulo to work for various newspapers and magazines. She left the capital in 2006 and moved around various countries throughout Europe and Latin America.

Her poems were first published in an anthology of Brazilian poetry, published in Argentina, under the title »Cuatro poetas Recientes del Brasil« (2006). A year later, she released her first publication with »rilke shake« (2007; En. 2015). In her texts, she draws from the oral traditions of the genre and cultivates a free approach to metrics, registers, and quotes. Although her work can hardly be placed in a particular category, the influences from Dada, Gertrude Stein, and Christian Morgenstern are apparent. »but gertrude stein is a charlatan thinks it’s fine to let one / loose under the water eh gertrude stein? it’s not possible/ that anyone could so enjoy making bubbles.« Even though elements of mockery are characteristic of many of her texts, Freitas also exhibits softer, painful tones, discusses poverty, loneliness, and depression. The English-language edition of »rilke shake« with translations by Hilary Kaplan received the National Translation Award (NTA) in 2016. In 2013, she published her second book of poems »Um útero é do tamanho de um punho« (tr: A Uterus the Size of a Fist), which was nominated for the Portugal Telecom Prize. The text is a critical yet humorous examination of gender identity. In collaboration with the artist Odyr, her graphic novel »Guadalupe« was published in 2012. The novel is a road trip and adventure story set in the heart of Mexico, in which the young Guadalupe drives her van across the country to fulfill her grandmother Elviraʼs last wish: a funeral to the music of a band at her place of birth in Oaxaca.

Angélica Freitasʼ poetry was not only translated into German and English, but also into Spanish, and was published in magazines such as »Poetry«, »Granta« and »Modern Poetry in Translation«. She was co-editor of the poetry magazine »Modo de Usar & Co«. Since 2017 she has been working on short performances, called »Canções de atormentar« (tr. Tormenting Songs), with her partner, the musician Juliana Perdigão, combining music, poetry, humour and social critique and tackling issues like women, children, consumerism, and brazilian politics. Freitas lives and works in São Paulo. She is a 2020 guest of the DAAD Artists-in-Berlin Program.