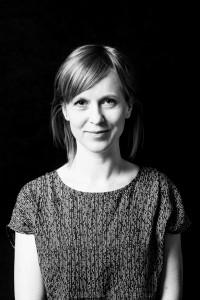 The Austrian writer Anna Weidenholzer was born in Linz in 1984. She studied comparative literature in Vienna and Wrocław and wrote her thesis on intercultural literature in Bosnia-Herzegovina. After finishing her studies, she worked as a ›chronicle journalist‹ for the Austrian newspaper Oberösterreichische Nachrichten.

Her first book »Der Platz des Hundes« (2010; tr. The dog’s place) is the story of individuals living lives of loneliness: an old man, for example, who makes pancakes for his long-since-passed dog using flour he doesn’t notice to be full of moths, or the young woman who buys a bottle of whiskey in anticipation of a visit from her boyfriend, but ends up drinking it alone when he doesn’t show up. As the author notes: »In this building, there’s an apartment up above and one below, but people don’t know anything about each other and thus live their lives parallel to one another. This is what I wanted to get across in the book: those brief overlaps.« In 2011, Weidenholzer’s debut was nominated for the Europäisches Festival des Debütromans in Kiel. Her novel »Der Winter tut den Fischen gut« (2012; tr. Winter is good for the fish) was short-listed for the Preis der Leipziger Buchmesse and explores the consequences of unemployment. It tells the story of a 47-year-old woman who loses her job in a boutique and subsequently lives on the fringes of society. In order to appear busy, she pretends to make telephone calls as she sits on a park bench; she has an excess of free time and her life ends up whizzing past in reverse chronology. Weidenholzer’s writing style is sober, slightly distant and dominated by a sequence of independent clauses that emphasize the hopelessness of the situation. In her source materials, she refers to a study called »Die Arbeitslosen von Marienthal« (tr. The unemployed of Marienthal) from 1933, which showed how long-term unemployment leads to resignation. In her latest novel »Weshalb die Herren Seesterne tragen« (2016; tr. Why gentlemen wear starfish), a retired teacher sets out to understand happiness using a modified 1979 questionnaire on »Gross National Happiness« in Bhutan. The retiree is increasingly forced to take flight, however, as he himself becomes the object of questioning. As »Die Zeit« noted, »Anna Weidenholzer superimposes the accountant-like crankiness of an older generation with the algorithmic processes of our present day. Indeed, this is the key feature of her novel. And although her latest work contains serious themes, it is far from a grave cultural critique and closer to an original, very Austrian sense of humor.«

In 2012, Weidenholzer was named the official writer-in-residence of Kitzbühel and Max Kade Writer-in-Residence at the Deutsches Haus at NYU, New York. In 2013, she received the Reinhard-Priessnitz-Preis and in 2017 the Outstanding Artist Award for Literature. She lives in Vienna.