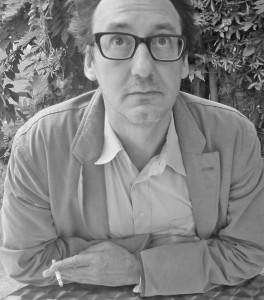 The Swiss poet and author Armin Senser was born in Biel in 1964. He studied philosophy, linguistics and German studies at the University of Bern. He moved to Berlin in 1998.

His earlier poetry appeared in the anthologies »Swiss Made. Junge Literatur aus der deutschsprachigen Schweiz« (2001; tr. Swiss made. Young literature from German-speaking Switzerland) and »Natürlich die Schweizer!« (2002; tr. The Swiss, of course!) as well as in the volume »Großes Erwachen« (1999; tr. Great awakening). His debut summoned up literary role models and comprised a thought poem for Joseph Brodsky, a »Brief an W. H. Auden« (tr. Letter to W. H. Auden) and a recollection of Rilke, among others. Senser does not subject himself to a schemata of rhymes or rhythms, but instead composes his poems in a type of »lyrical essayism« (FAZ) that always begins with a particular image or feeling: »Every poem must have a stopping point in sensuous experience, a reference point to that which is familiar.« In »Jahrhundert der Ruhe« (2003; tr. Century of Calm) one finds references to Ovid, Schiller and Mandelstam, among others. Senser follows the subtlest inspirations of his perception, anchors these observations in the sensuous realm and points to the metaphysical. His focus in »Kalte Kriege« (2007; tr. Cold wars) is on our present era; without going into day-to-day politics, his poems about the peaceless start of the 21st century are both politically concrete and naturally timeless. His novel »Shakespeare« (2011) is a fictitious biography written in rhymed long lines; in over sixty chapters, he avails himself of well-known biographical data to tell the story of The Bard’s childhood in Stratford, his marriage to Anne Hathaway, his move to London and his gloomy experience of poverty. Senser portrays a man torn between a settled family home and a life of debauchery who ultimately wrestles with the certainty of a life confession: »What / is true? When we cannot find the words that do justice / to our feelings. When we leave to words, where / none are needed. What then is true?« In the formally strict and prosaic long-lines of »Liebesleben« (2015; tr. Love life), the lyrical narrator engages in a dialogue with Dante Alighieri, pays homage to Caravaggio and makes reference to Warhol and Vergil. That same year, Senser published a volume of essays called »Priester und Ironiker. Über Literatur« (tr. Priests and ironists. On literature). In his latest work, »Sensus« (2016), he reflects on the nature of human failure and describes the slow return to life that follows such missteps.

Senser is also a translator and dramatist. He has received a number of awards, including the Buchpreis des Kantons Bern, the H. C. Artmann-Stipendium of the City of Salzburg and the Poesiepreis des Kulturkreises der deutschen Wirtschaft. He lives in Berlin.