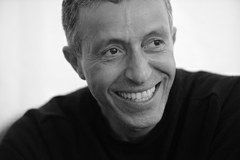 Azouz Begag was born in Lyon in 1957 to Algerian immigrants. He was confronted with racism and discrimination while still at school. Despite his initial plan to eventually return to Algeria, where he spent the summer with his brothers, in his mid-twenties he decided that he would stay in France. From 1980 he was employed by the Institute for Social Sciences and Humanities in Lyon, and worked as a researcher at the CNRS (Centre national de la recherche scientifique), one of the biggest research centers in Europe. In 1984 Begag obtained his doctorate in economics at the Université Lyon 2 with a thesis on »L’Immigré et sa ville« (tr.: The Immigrant and his City), a sociological study on the mobility and identity of urban migrants. He also became a visiting professor at Cornell University, New York, in 1988.

In addition to his scientific career, Azouz Begag made his debut as a writer with the autobiographical novel for young people »Le Gone du Chaâba« (1986; Eng. »Shantytown Kid«, 2007). The detailed and humorous recollections of a child whose parents were itinerant workers, it also deals with issues of dual identity and the differences between migrant generations. The novel received numerous prizes, and was made into a film in 1998. Since then, Begag has written more than two dozen books for children and young adults, as well as novels, essays and non-fiction works on cultural and political issues, focusing in particular on immigration and integration. Most recently he published the essay »… C’est quand il y en a beaucoup …« (2011; tr.: When There is Much of It … ), which explores the current dangers and problems of French contemporary society and is based on the many years he worked as a sociologist and politician, and, in 2012, the novel »Salam Ouessant«. The latter, autobiographically influenced work tells of an Algerian man, who, after getting divorced, tries to regain the love of his daughters during the summer holidays they spend together in Ouessant in the Bretagne.

In 2004, Begag became a member of the UN Economic and Social Council. From 2005 to 2007, he was Associate Minister for the Promotion of Equal Opportunities under the then ruling Prime Minister Dominique de Villepin, and during his time in office fought on all levels for diversity in society. Begag was appointed a Chevalier of the Legion of Honor in 2005 and received the Ordre national du Mérite in the same year. He is also a sponsor of the NGO »Bibliothèques Sans Frontières« (tr.: Libraries without Frontiers), which campaigns for the creation and support of libraries internationally. Begag lives in Paris.