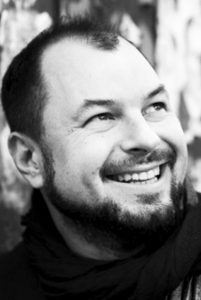 Dmytro Lazutkin, born 1978 in Kyiv, is known in Ukraine as a poet and sports reporter. He studied at the Kyiv National Technical University and worked as an engineer, lawyer, karate trainer, and a presenter on Ukrainian television. As a reporter, he commented on the Olympic Games in Beijing (2008), Vancouver (2010), and London (2012) as well as the European Games in Baku (2015) and the boxing matches of the Klitschko brothers and Vasyl Lomachenko. He himself has actively trained in various martial arts, including karate and kickboxing, and has occasionally competed in boxing matches. He has also received various sports awards. After the first publication of his poems under the title »Dachy« ( 2003; tr: The Roofs), he followed up with the volumes »Sododošči dlja plazuniv« (2005; tr: Sweets for Reptiles), »Nabyti travoju svjaščenni korovi« (2006; tr: Grass-Stuffed Sacred Cows), and »Paprika grez« (2006; tr: Sweet Pepper of Dreams), for which he was shortlisted for the prestigious Russian literature prize »Bolschaya Kniga« in 2008, and with which he won third place in the »Sotrushestwo« competition. From 2012 onward, he released the volumes »Dobri pisni pro pohanych divčat« (2012; tr: Good Songs About Bad Girls), »Koljadky i val’sy« (2014; tr: Christmas Songs and Waltzes) and »Červona knyha« (2015; tr: Red Book). His poems, written in Russian and Ukrainian, are rhythmically reminiscent of slam poetry techniques and reveal Lazutkin’s connection to sports. His credo: »I am not interested in the future of Ukrainian literature in the international arena. Our reader is right here. I truly believe that we need one another. Everything else is just the pleasant side effects of literature and a lot of fussing about its patrons.« Together with the musician Boris Sevastyanov, Lazutkin launched the music project »Arteria«, which combines powerful lyrics with hip-hop, rock, and classical music. The duo performed in the Donbass before the Ukrainian soldiers stationed there. His impressions of these journeys to the front as a volunteer, which Lazutkin undertook from 2014 onward, found their way into the poems of his latest book, »Arteria« (2018). The Ukrainian director Serhij Proskurnja chose Lazutkin’s »Requiem« as the text for the oratorio »Z nami Bog« (2014; tr: God With Us). The work, which is dedicated to the combatants in eastern Ukraine, was performed at Sophia Square in Kyiv on the occasion of the twenty-third anniversary of the country’s independence. Lazutkin has also written lyrics for various Ukrainian bands. His poems have appeared in Ukrainian, Russian, Georgian, and Polish literary magazines and anthologies as well as published   in translations in Lithuania, USA, UK, Germany, Austria, Czech Republic and Slovakia.

He lives in Kyiv.