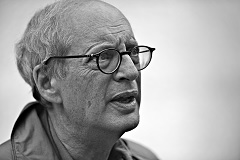 Eliot Weinberger was born in 1949 in New York City. His most recent books of literary writings include the »serial essay« »An Elemental Thing« (2007), »Oranges & Peanuts for Sale« (2009), and The Ghosts of Birds» (2016). «The New York Times» has called him «one of the world’s great essayists». His work regularly appears in translation and has been published in some thirty languages. In Germany, he is a regular contributor to »Lettre International« and has published four collections: »Kaskaden« (2003), »Das Wesentliche« (2008), »Orangen! Erdnüsse!« (2009), and »Vogelgeister« (2015). »Die Zeit« has written: »One remains in silent amazement: How does he find these stories? How does he know everything?«

His political articles are collected in »What I Heard About Iraq« (2005) and »What Happened Here: Bush Chronicles« (2005) a finalist for the National Book Critics Circle award for criticism and selected for the »Times Literary Supplement’s« International Books of the Year. »The Guardian« (UK) said of »What I Heard About Iraq«: »Every war has its classic antiwar book, and here is Iraq’s.« It has been adapted into a prize-winning theater piece, two cantatas, two prize-winning radio plays, a dance performance, and various art installations; it has appeared or was linked on hundreds of thousands of websites, and was read or performed in nearly one hundred events throughout the world on 20 March 2006, the anniversary of the invasion. When George W. Bush visited the town of Stralsund, Germany, in July 2006, the local residents protested with a public reading of the text.

The author of a study of Chinese poetry translation, »19 Ways of Looking at Wang Wei«, he is the editor of »The New Directions Anthology of Classical Chinese Poetry«, also a »TLS« International Book of the Year, the translator of two books of poetry by Bei Dao, and the series editor of »Calligrams: Writings from and on China«, published by Chinese University of Hong Kong Press and New York Review Books. Among his many translations of Latin American literature are »The Poems of Octavio Paz«, Vicente Huidobro’s »Altazor«, and Xavier Villaurrutia’s »Nostalgia for Death«. His edition of Jorge Luis Borges’ »Selected Non-Fictions« received the National Book Critics Circle award for criticism. He is the literary editor of the Murty Classical Library of India.

In 1992, he was the first recipient of the PEN/Kolovakos Award for his promotion of Hispanic literature in the U.S.; in 2000, he became the only American literary writer to be awarded the Order of the Aztec Eagle by the government of Mexico. He is prominently featured in the »Visitor’s Key to Iceland«, and was chosen by the German organization Dropping Knowledge as one of the »world’s most innovative thinkers«. At the 2005 PEN World Voices Festival, he was presented as a »post-national writer«. Eliot Weinberger lives in New York City.

Oranges and Peanuts for Sale

The Wall, the City, and the World

The Ghosts of Birds