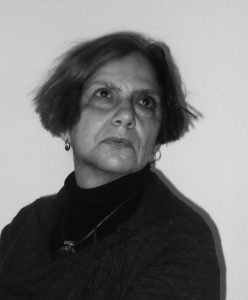 Eugenia Kononenko was born in Kyiv in 1959. She studied mathematics and mechanics at the State University in her native Kyiv until 1981 and French philology at the Pedagogical University for Foreign Languages until 1994.

Kononenko is the author of numerous short stories and is also a literary translator from French and English. She was awarded the Zerova Prize in 1993 for her translation of French sonnets for an anthology.

Her own texts include children’s books, poems, stories, novels, and essays, including on cultural studies topics. Her texts appear in practically every anthology of translations of contemporary Ukrainian prose and have also been published in Ukrainian journals such as »Sutschasnist«, »Kurer Kriwbasa«, and »Beresil«.

In the early years of her literary career, critics already praised her style: »With her prose debut ›Gegenwart‹ (tr: The Present), Eugenia Kononenko emerged on the Ukrainian literature scene as an interesting prose writer with an original style. Above all, Eugenia’s stories are written with a lightness and openness, a dynamism and inner dignity, even when they concern the everyday.« Her literary role models include Paul Auster, Milan Kundera, and Marguerite Yourcenar. Kononenko is regarded as a representative of the »new literature« that has developed since the country’s independence. In her prose, she uses elements of colloquial, youth, and street language. Many of her often humorous and ironic stories have been translated into Russian, English, German, French, and other languages.

In the central text of her collection of short stories, »Kat« (2014; tr: Executioner), she writes about a man who executes political prisoners under Stalin and later writes down his experiences. Kononenko’s grandfather was a victim of the repressions of 1937; she knows little about how he died, and in an interview, stated that only the executioners of that time could provide information about the victims’ last hours. The stories of the anthology »Simbalain« (2015), in which the author adopts the perspective of an uninvolved observer, take up the often painful aspects of life and show the contradictions inherent in human nature. Here, Kononenko works strongly with theatrical moments, with one story bearing the title »Life is Theater«.

Kononenko has been awarded numerous prizes for her literary work, including »Granoslov«, »Knishka roku«, and the literature prize from the magazine »Beresil«.

Kononenko is a member of the Ukrainian Writers’ Association and currently works as a research assistant at the Ukrainian Center for Cultural Studies.

The author lives in Kyiv.