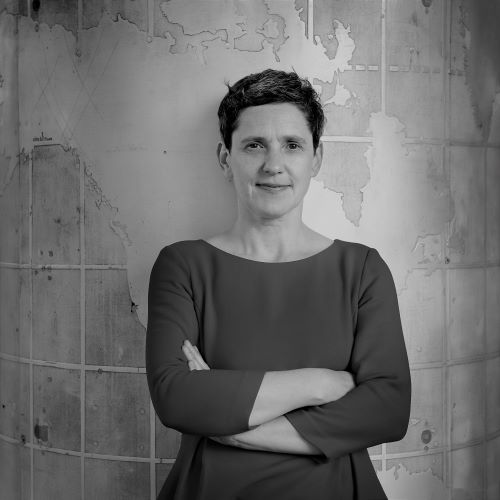 Felicitas Hoppe was born in 1960 in Hameln. She studied rhetoric, literature, and religion in Tübingen, the USA, Rome, and Berlin, and worked as a journalist and language teacher. In 1996, she published her first short story collection, »Picknick der Friseure« (tr: Hairdressers’ Picnic). Even these short pieces of prose are written in a style that is all Hoppe’s own. Fairy tale-esque, surreal plots are narrated in a brisk yet blithe tone with playful shifts of chronological sequences and interconnections between different levels of meaning, and allow for confusing, strange, and dark effects on the senses. Quotes, allusions, self-references, wordplay, and figures of speech are her preferred linguistic devices, which she brings together with lightness and precision; travel and departure are the dominating motifs.

With her début, Hoppe won the Aspekte-Literaturpreis from ZDF and used the prize money to take a trip around the world on a container ship. Her impressions flowed into the novel »Pigafetta« (1999), in which they are mixed with the fictive report of a historical companion of Magellan on his circumnavigation of the world. Journeys across nations, history, and literature are also undertaken in »Paradiese, Übersee« (2003; tr: Paradises, Overseas) and »Verbrecher und Versager« (2004; tr: Delinquents and Losers). Lectures and readings led the author on travels to India, Indonesia, West Africa, and Japan. Hoppe’s works also include children’s books, including »Drei Kapitäne« (1997; tr: Three Captains) and »Ingrids Affen« (2006; tr: Ingrid’s Monkeys) as well as »Iwein Löwenritter« (2008; tr: Iwein, or the Knight with the Lion), a retelling of the medieval novel by Hartmann von Aue. In »Hoppe« (2012), she tells her dream biography of a Canadian childhood on thin ice, a youth in Australia at the edge of the desert, trips across the sea, and escape to America. In her most recent novel »Prawda. Eine amerikanische Reise« (2018; tr: Pravda: An American Journey), Hoppe takes on a journey rich in fantasy and symbolism through literary America, from Boston to San Francisco and Los Angeles and back to New York, on the trail of the Russian cult writers Ilf and Petrov.

Hoppe is still actively teaching; in 2006, she was the Max Kade Distinguished Visiting Professor at Dartmouth College in Hanover, New Hampshire. Since 2007, she has been a member of the German Academy for Language and Literature and in 2016 she was awarded an honorary doctorate from the Leuphana Universität Lüneburg. Her works have been translated into many languages. The author lives as a freelance writer in Berlin.