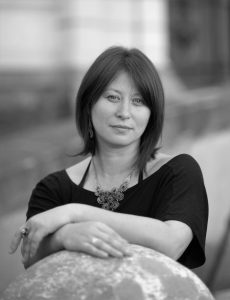 Halyna Kruk was born in 1974 in Lviv, Ukraine. Her first two collections of poetry, which won the Ptyvitannia Zhyttia Ukrainian literature competition and the Granoslov Prize, were published in 1997; »Mandry u Poshukakh Domu« (tr. Journey in search of a house) and »Slidy na Pisku« (tr. Traces in the sand) expose Kruk as an extraordinary new voice in Ukrainian poetry. After giving birth to a son she began writing poetry and prose for children, which she published in journals and anthologies. In 2003 she won the international children’s book prize, Step by Step, in the Netherlands. Her children’s books »Marko mandruje navkolo svitu« (2007; tr. Marko travels around the world) and »Vazhko buty najmenshym« (2008; tr. It’s hard to be the youngest) were translated into 15 languages. In 2001 she completed her doctoral dissertation on the literary Baroque in Ukraine and began to write prose, initially short stories. Her e-mail exchange with the Lithuanian author Sigitas Sjudika provided the inspiration for a subsequent novel exploring the degree to which gender determines one’s personality and relationships to others. For Kruk herself, the individual is always the factor of primary importance; gender is merely secondary. This theme also resonates in her volume of poetry titled »Oblychchia poza svitlynoju« (2005; tr. The face beyond the photograph), in which she declares that as a poet she is not a woman, for poets are genderless. For Kruk poetry is inconceivable outside the tangible reality enveloping us; she cannot »write about the stars in the sky if there is something more important, immediate, current. Poetry is built from living material, and that requires taking meticulous care of the poetic resources«. Her latest volume of poetry, »Spіv/іsnuvannja« (2013; tr. Song/Existence), comprises more than 70 texts collected over 6 years. German translations of her poetry can be found at lyrikline.org.

In 2003 Halyna Kruk received a »Gaude Polonia« stipend. She also works as a literary translator from Polish, Russian and Belarusian into Ukrainian; the authors she has translated include Kazimierz Wierzyński, Wisława Szymborska, Bohdan Zadura, Stanisław Lem, Igor Belov and Andrėj V. Chadanovič. Kruk is a professor of literature at Ivan Franko National University in Lviv, where she also lives.