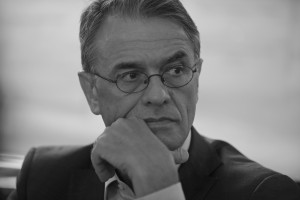 Readers with an interest in the field cannot fail to notice Vlavianos’s interest in the poetry of important modern Greek writers such as Constantine Cavafy, George Seferis, and Nikos Karousos. Parallels between his verse and the work of American language poets he has translated, such as Wallace Stevens and John Ashbery, are just as evident. A frequent theme of Vlavianos’s poetry is history (both as a concept and as a sequence of events). Vlavianos’s poems usually deal with the twists and turns in his family’s fortunes, which he consciously treats as archetypical examples of emotional dependency, loss, or betrayal. In his work eroticism and love are portrayed as both ambivalent and as the elemental root of happiness. Poetry itself and its endangered status are also a source of inspiration for Vlavianos. He expresses himself in a rare elegance of language, combining a basic commitment to formal transparency with a few selectively used syntactical and lexical violations. The sound of this language, despite the structural variety in Vlavianos’s verse, gives the impression of reading a stylistically unified body of work. Perhaps this special tone best attests to Vlavianos’s qualitative enrichment of European poetry. To date, Vlavianos has written twelve volumes of poetry, including »O aggelos tis istorias« (1999; tr: The angel of history) and »Meta to telos tis omorphias« (2003; tr: After the end of beauty), both nominated for the Greek National Prize. He has also published essays. Despite the title of a collection of essays, »Poion aphora he poiese? Skepseis gia mia techne peritte« (2007; tr: Does poetry matter? Thoughts on a useless art), he has remained true to poetry with »Diakopes stin pragmatikotita« (2010; tr: Vacation in reality) and »Sonneta tis symforas« (2012; tr. Sonnets of despair). His most recent work »To aima nero« (2014; tr: Blood into water) describes in 45 prose miniatures a childhood emotionally shaped by love, ranging from despair and hatred to complete indifference and tragicomical pathos. Vlavianos has translated T.S. Eliot, Ezra Pound, Walt Whitman, Anne Carson, Fernando Pessoa, Zbigniew Herbert, William Blake und Carlo Goldoni, among other authors.

Vlavianos was awarded the title of »Cavaliere« by the Italian Republic for promoting Italian literature in Greece. He lives in Athens, where he teaches at the American College of Greece, is an editor of foreign-language fiction with Patakis publishers, and is the publisher of the literary journal »Poiitiki«.