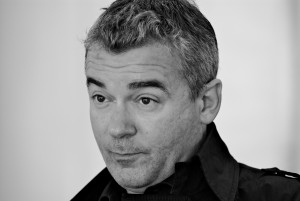 Ilija Trojanow was born in Sofia, Bulgaria in 1965. In 1971, his family fled via Yugoslavia and Italy to West Germany. They then moved to Nairobi, Kenya, where Trojanow grew up, interrupted by a three-year stay in Germany. After studying in Munich, he founded the Kyrill und Method publishing house, and Marino Verlag, which focused on African literature.

His highly acclaimed début novel was »Die Welt ist groß und Rettung lauert überall« (1996, tr. The world is big and safety lurks everywhere). With alternating moods and an exuberant love of storytelling, this autobiographical family saga conveys the author’s fundamental motivation and concern, which is to portray cultural heterogeneity not as a problem or disaster, but instead as a normal state of affairs, an opportunity and even a stroke of luck. Trojanow repeatedly takes a critical approach to his home country and its current state of affairs. Years of research in Bulgaria led to his reportage »Hundezeiten« (1999, tr. Dog years), published in a revised version as »Die fingierte Revolution« (tr. The sham revolution) in 2006. This work was a provocative reckoning with the old nomenclature that has transformed into an oligarchy behind a smokescreen of democracy. In his novel »Der Weltensammler« (2006; Engl. »The Collector of Worlds«, 2008), Trojanow examines the life of British colonial officer and ›Orientalist‹ Richard Francis Burton, an eccentric master of disguise who studied numerous cultures and languages, translated »Tales of 1001 Nights« and the Kama Sutra, travelled to Mecca without being recognized and searched for the source of the White Nile. In 2009, together with Juli Zeh, Trojanow published »Angriff auf die Freiheit« (tr. Attack on freedom), a critique of state intrusion into the private sphere of its citizens. His novel, EisTau (2011; tr. IceMelt) is dedicated to the glaciologist, Zeno, and to the splendor of nature and the perils it faces. In »Macht und Widerstand« (2015; tr. Power and resistance), Trojanow once again takes up the theme of tyranny in Bulgaria. Drawing on the wealth of biographical facts he was able to collect starting the 1990s in the archives of the GDR’s Staatssicherheit as well as in interviews with witnesses, he wrote the story of a resistance fighter who gets caught in the crosshairs of the secret police and a careerist officer. In »Meine Olympiade« (2016; tr. My olympiad), he describes his training experiences in all eighty summer Olympic disciplines and balances these with texts on the cultural history and traditions of the various sports.

Ilija Trojanow has received the Adelbert von Chamisso Prize, the Leipzig Book Fair Prize, the Berlin Prize for Literature, the Carl Amery Prize and the Heinrich Böll Prize 2017, among others. He was writer in residence in Mainz, Heiner Müller Guest Professor in Berlin and Brothers Grimm Professor at the University of Kassel. The author lives and works in Vienna.