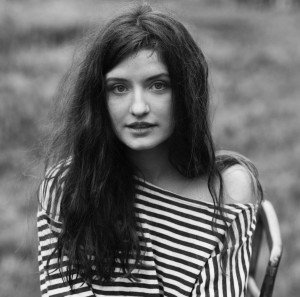 Iryna Tsilyk has published the poetry book »Qi« (2007; tr. This), the novel »Pisljavtschora« (2008; tr. The day after yesterday), several volumes of short stories and two children’s books. Impact, precision and a cinematic perspective make Tsilyk’s prose stand out. Just like in »Chervoni na chornomu slidy« (tr. Red marks on black), Tsilyk’s protagonists are mostly ordinary residents of Kiev, her hometown. They are children, seniors, disabled people, street vendors. Their stories can be bitter as they scrape by in their miserable apartments. There’s Nina who is forced to live in the same apartment as her ex-husband even though they are divorced. She packs up food for her son, who will be spending his birthday in a penal colony. Then there is the nurse caring for a young man whose promising future has been destroyed by an incurable disease and can only see the world through a camera on his window. Over time, these two form an unlikely friendship despite the age gap, enabling the young man to see the world from a different perspective. Tsilyk’s stories about children are particularly exceptional. For example, she tells the story of an orphan girl who has to peddle wares in underpasses and is bullied by her friends, neighbors and classmates. Tsilyk also wrote the English language reference work »Awesome Ukraine« with her husband, Artem Cech.

Iryna Tsilyk has won several literary awards, including first prize in the »song lyrics/romantic poetry« category of the Ukrainian »Koronacija slowa« (tr. Crowning the word) competition. She also won the award presented at the Ukrainian literature festival Molode Vyno in 1999 and 2001 and both the Grand Prix and the public choice award at Pidkowa Pegasa, another Ukrainian literature festival. Some of her poems and short stories have been translated into English, German, Polish, Lithuanian and Czech languages, were presented at several international literary festivals and events. Aside from her writing and directing work, Iryna Tsilyk is also a songwriter for various Ukrainian bands and musicians, such as Sestri Telnjuk and Kozak System. She also acted in Alena Demyanenko’s movie »My Grandmother Fanny Kaplan« (2016) about the life of Lenin’s would-be assassin. The author lives in Kyiv.