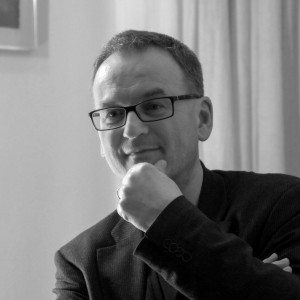 Jan Koneffke was born in Darmstadt in 1960 and grew up in Gravenbruch (Neu-Isenburg) and Braunschweig. He began a degree in German studies and philosophy at the Freie Universität Berlin in 1981 and graduated in 1987 with a thesis on Eduard Mörike.

Koneffke published his debut »Vor der Premiere« (tr. Before the premiere) in 1988. He had received the Leonce-und-Lena Prize for Poetry in 1987, and the title of his epic narrative alludes to the fact that he was expected to debut with a volume of poetry. Instead, the novel portrays an actor preparing for his role as a hunchback, only to grow a real hunchback shortly before the premiere. A year later, Koneffke published a book of poetry, »Gelbes Dienstrad wie es hoch durch die Luft schoß« (1989; tr. Yellow bicycle as it shot high through the air), a work of dynamic verse in which he creates virtuoso imagery that plays ironically with ancient painterly ideas. In 1995, he received a Villa Massimo scholarship and worked in Rome for seven years as a cultural correspondent for various media. In his prose miniatures »Gulliver in Bulgarien« (1999; tr. Gulliver in Bulgaria), Koneffke processed his experiences traveling to Plovdiv und Sofia. His novel »Paul Schatz im Uhrenkasten« (2000; tr. Paul Schatz in the clock cabinet) made the top spot on SWR’s critics’ list in 2000. The novel takes place in Berlin’s Scheunenviertel during the Nazi and post-war eras and tells the survival story of a child with a Jewish father in an absurdist, fairy-tale manner. From the naïve perspective of the young narrator, the author is able to illuminate the monstrousness and grotesque spectacle of the world. Unanimous praise was given to Koneffke’s »Die sieben Leben des Felix Kannmacher« (2011; tr. The seven lives of Felix Kannmacher), the second part of his Pomeranian family saga, which started in 2008 with »Eine nie vergessene Geschichte« (2008; tr. A story never forgotten). With ingenious wit and a melodious tone, Koneffke tells a tale of chicanery in the era of dictatorships and shows »in an exemplary manner the absurd turns and trajectories of European history« (»Falter«). »Ein Sonntagskind« (2015; tr. A Sunday’s Child), the final volume Koneffke’s trilogy, received the Uwe Johnson Prize in 2016. The novel follows the life of philosophy professor Konrad Kannmacher, from his time as a soldier at the end of WWII to the 1990s, thus painting a panorama of post-war West Germany.

Koneffke wrote many popular books for children and young adults, including the poetic picture book »Die Schlittenfahrt« (2005; tr. The sleigh ride), »Die Sache mit Zwille« (2008; tr. The thing about Zwille) and »Trippeltrappeltreppe« (2009; tr. Scamper-smatter stairs). He wrote several travelogues on Italy and Rumania and also translates from Italian and Rumanian. A member of several literary juries, Koneffke was co-editor of »Wespennest« magazine from 2004 to 2007 and still works there as an editor. He lives in Vienna and Bucharest.