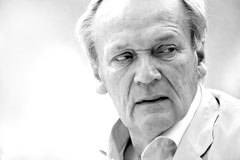 Joachim Sartorius was born in Fürth, Germany in 1946 as the son of a diplomat. As a result, he attended schools in Tunisia, Congo, and Cameroon. From 1964 to 1971, he studied Law in Munich, London, Strasbourg, and Paris. After earning his Doctor of Laws in 1973, he worked in the diplomatic service until 1986, including as a cultural officer in New York, press officer in Ankara, and finally envoy in Nicosia, Cyprus. In later years he headed the Artists Program of the German Academic Exchange Service, was Secretary General of the Goethe Institute in Munich, and directed the Berlin Festspiele from 2001 to 2011.

Sartorius made a name for himself as a poet and editor. His translations from English to German include poems by John Ashbery, Wallace Stevens, Louis Dudek, and Robert Gray. He was also the editor of the complete works of Malcom Lowry and of William Carlos Williams. In »Atlas der neuen Poesie« (1995; tr Atlas of the new poetry), probably the most comprehensive collection of contemporary poetry, Sartorius located poems from 36 countries in 22 languages; the volume contains the originals as well as German translations. In 2014, it was followed by »Niemals eine Atempause« (tr Never a pause for breath), a handbook of 20th-century political poetry. Along with seven books of poetry, most recently »Hôtel des Étrangers« (2008; tr Hotel of strangers), Sartorius has also written poetic travel books: »Die Prinzeninseln« (2009; tr The Princes Islands) and »Mein Zypern« (2013; tr My Cyprus). A reviewer in the »Frankfurter Allgemeine Zeitung« called the first »a very personal mini-epic furnished with autobiographical episodes, full of poetry and subtle political observations, that not only takes its readers along to the Princes Islands, but also introduces them to a remnant of a Turkish way of living that far too few of us realize still exists«. In »Mein Zypern«, as well, Sartorius takes recourse to his experiences as a diplomat on site and lets information about the island’s history and culture flow into the book, which ends with an appendix full of poems. With Norbert Miller, he is also the editor of the literary magazine »Sprache im technischen Zeitalter« (tr Language in the technical era).

Sartorius is a member of the Deutsche Akademie für Sprache und Dichtung (tr German academy for language and poetry) and sits on the jury of the annually conferred Friedrich Gundolf Prize. After being awarded a Rockefeller Foundation Fellowship in 1992 and the Paul Scheerbart Prize in 1999, in 2011 Sartorius was named a Chevalier des Arts et des Lettres. He lives in Berlin and Syracuse.